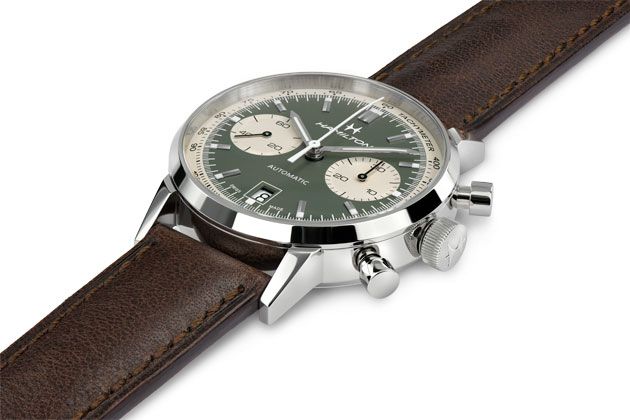 In the Japanese baseball world, Teruaki Sato, also known as “Sattel,” is a hot topic in Hanshin’s super-large rookie, who mass-produces hits and home runs with one of the longest hits in the league. However, there are popular models in the world of wristwatches that are not sluggers that are mass-producing hits. The timepiece that can be counted as one of them is the “Intramatic Auto Chrono” of “Hamilton” that will be the spotlight this time. This model is a modern revival of the hand-wound “Chronograph A” and “Chronograph B” released in 1968. While retaining the appearance of the two-counter dial, commonly known as the “panda dial” or “reverse panda dial,” we are also trying to update the performance with a self-winding mechanical movement. It was in 2019 that the model, which was positioned as a hit in the “American Classic” collection, was revived. Since it was widely accepted, the Milanese bracelet adopted model appeared following the first leather strap. I was wondering if the hand-wound model was released in succession, but this time, a new color of the self-winding model is coming out … Looking at this trend, it is clear that this model is a hit for hit-making machines.

The model that adopted the green dial, which is gradually becoming a trend in the wristwatch world, was released as a new face of such a noteworthy work. It can be said that it is a large rookie timepiece that can aim for a classic face full of charm that will never fade and a fork that feels the season, and can also aim for hits while keeping the trend firmly in the defensive range. 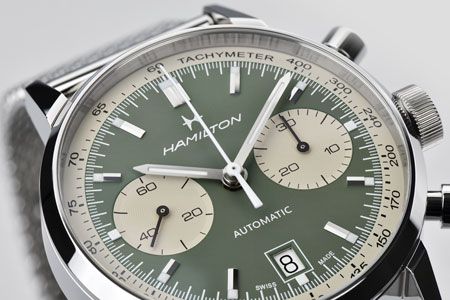 It is a new color of “Intramatic Auto Chrono” whose expectations are naturally rising due to its high reputation, but the finish of the green dial is an exquisite workmanship that makes us feel a further hit. As you can see in the close-up photo above, select a pale tone that suppresses color development even in green. By using a soft ivory color for the sub dial and tachymeter that produce a reverse panda face, an elegant contrast is drawn. Due to the classical appearance of the wristwatch itself, there is no impression that it incorporates fashionable colors. As one of the ways to express a vintage taste, I can’t help but take off my hat to give the impression that green is taken in casually. There is no need to worry about fighting with the color of the clothes, and the color scheme is naturally adopted, so it seems to be a work that will reach out to those who have felt the difficulty of green even though it is a trend. 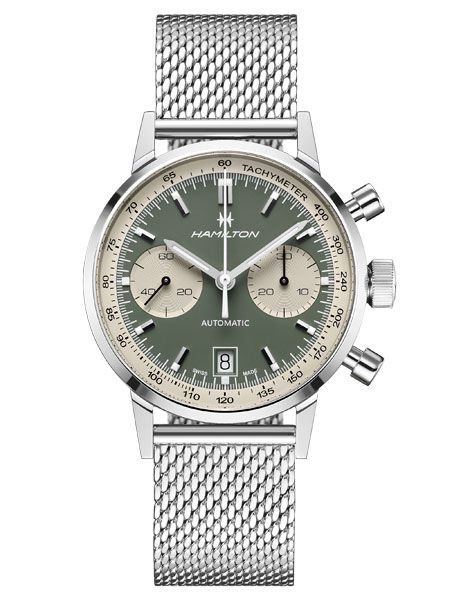 In addition to the calf-tailored leather strap, the “Intramatic Auto Chrono” green dial model also has a lineup of Milanese bracelets. In the former, dark brown leather goes well with green, and the finish can appeal the vintage taste. On the other hand, the latter has a light knitting that fits comfortably on the curve of the wrist, and has a strong presence as a design that adds a sense of dress. The impressions they give off from their wrists are different and each has its own merits, but it must be a perfect timepiece for adults of the age who can see the historical background to adopt trend colors. The one that colors the arm of the short-sleeved season may have already been decided, but if you drop it in the position of a designated hitter, this green-dyed reverse panda dial may give more results than expected.