“Jaeger-LeCoultre” was born in Switzerland in the first half of the 19th century. Manufacture’s ability to manufacture almost everything about watches in-house still captivates watch lovers around the world.

Over 180 years of history. “Jaeger-LeCoultre” with great evaluation of watch tsu 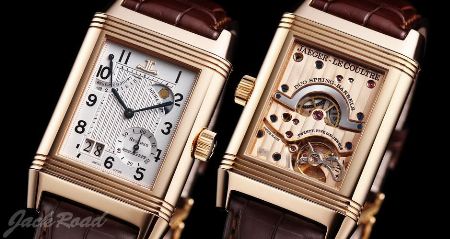 The roots of Jaeger-LeCoultre are in the watch studio founded by the founder Antoine LeCoultre in 1833 in the Vallée de Joux, the center of the Swiss watch industry. He invented groundbreaking machine tools used in watchmaking one after another, such as milling machines and accurate measuring instruments. In 1866, he used his technological capabilities to establish the first Manufacture in the Vallée de Joux. In 1903, his grandson, Jack David Lecoultre, created an ultra-thin caliber at the request of Parisian watch engineer Edward Jaguar. This encounter officially gave birth to the name “Jaeger-LeCoultre” in 1936.

The reason why it is called a “true manufacture” lies in its technological capabilities. 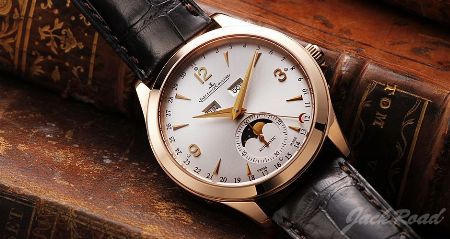 A watch maker that manufactures in-house from the movement is called a “manufacture”, but among them, “Jaeger-LeCoultre” can be said to be exceptional. We have acquired more than 400 patented technologies related to watchmaking. From its founding to the latter half of the 20th century, it has a history of supplying movements and parts to the watch maisons of Geneva and the Vallée de Joux. In particular, the 1,260 types of movements are highly evaluated, and there are many masterpieces that have made a name for themselves in the history of watches. 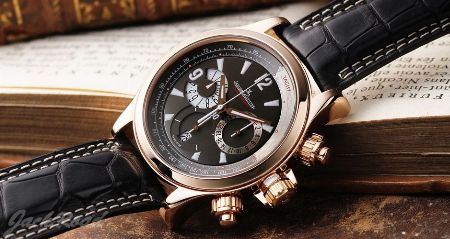 The movement, which is particular about in-house parts from escapements to balances, boasts the highest quality and performance in Switzerland. In addition, there are a wide variety of variations, from manual winding to automatic winding, various calendar mechanisms, chronographs, and tourbillons. The highest peak movement that the famous watch maison, including the world’s three major watch brands, places tremendous trust. The reason why “Jaeger-LeCoultre” is called “true manufacture” is because of its outstanding technical capabilities.

The best technician in the watch world. What are the benefits of getting “Jaeger-LeCoultre”? 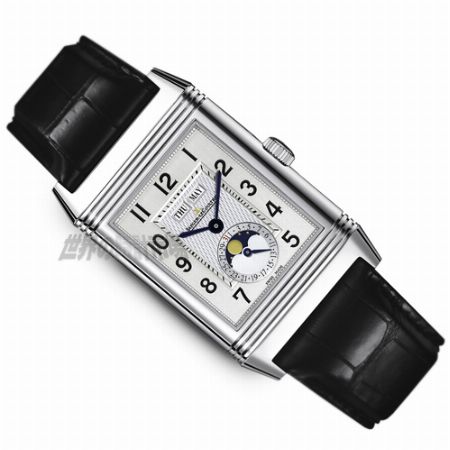 Original design is also one of the elements that “Jaeger-LeCoultre” attracts watch fans. In fact, this strength is also backed by the technological capabilities unique to the Manufacture. In the case of Etaburi Sur (a watch maker that outsources movements), there are cases where the design is restricted by the shape of the movement, but in that respect, Jaeger-LeCoultre, which has a huge variety of movements, does not have to worry about that. Dozens of types are prepared according to the function and shape of “Reverso” alone. This highly flexible design power has created many masterpiece watches.

Superiority complex brought about by brands with overwhelming complications 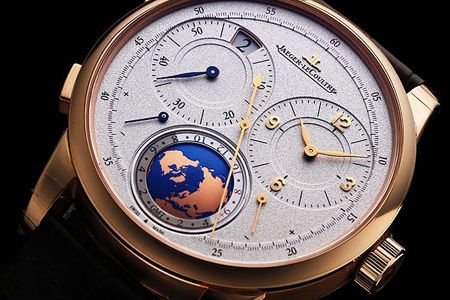 The technological capabilities of “Jaeger-LeCoultre” have also been devoted to the development of complex mechanisms. For example, the “Memo Box” with a gong-type alarm mechanism that was born in 1950. Six years later, we evolved this mechanism into the world’s first automatic winding, and in the 1950s we also announced the world’s first alarm-equipped diver’s watch “Deep Sea” that adopted this mechanism. And in 2006, the triple-faced ultra-complex watch “Reverso Grand Completion Triptych” was announced, which surprised watch fans. The history of such splendid complications can also be said to be one of the factors that enhance the status of “Jaeger-LeCoultre”.

Because of that confidence. Accuracy guaranteed by our unique “1,000 hours control test” 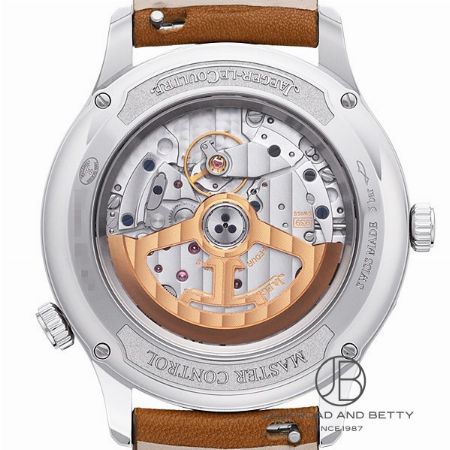 The Jaeger-LeCoultre headquarters in the Vallée de Joux imposes a unique test of “1,000 hours control” on all watches. The contents cover six items: accuracy, temperature change, atmospheric pressure change, impact resistance, magnetism resistance, and waterproofness, and the time is as long as 1,000 hours. Its rigor exceeds the standards of the Swiss watch “COSC” (Swiss official chronometer certification body). The high performance and quality of Jaeger-LeCoultre is underpinned by these uncompromising product tests.

This is synonymous with “Jaeger-LeCoultre”. 5 “Reverso” with rich features and sizes

Speaking of the masterpiece of “Jaeger-LeCoultre”, the model whose name is mentioned first is “Reverso”. The square watch, which was born in 1931, meets the demand of British officers for “a watch that can be worn even during polo competitions.” In addition to the original reversible case, the design that retains the influence of Art Deco, such as the rectangular case with a golden ratio and the godron decoration on the top and bottom of the case, is also a reason for its popularity. There are three series, “Classic” of Arabic index, “Tribute” with the motif of the first dial, and “One” for women. 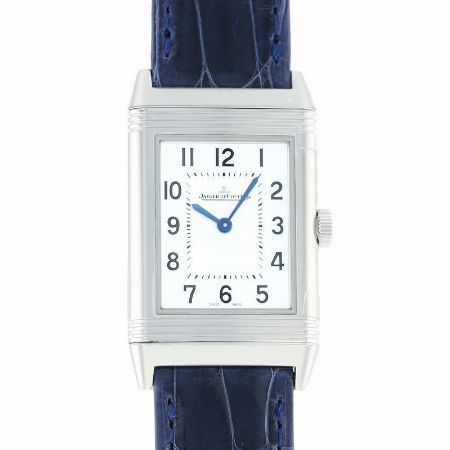 A masterpiece with a small rectangular case, two hand-wound movements, and the royal road of “Reverso”. The simple design does not choose the dress to match, from casual holidays to solid suit styles. The navy alligator strap that matches the color of the hands also enhances the elegant image. SS case, size 24.4 x 40.1 mm, hand-wound. 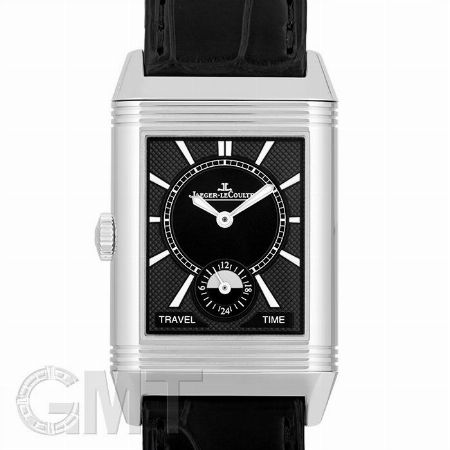 “Reverso” adopts the concept of “Duo” that displays different times on the front and back. The silver side features a guilloche carving in the center of the dial and a small second at 6 o’clock. A 24-hour counter is installed at 6 o’clock on the black surface that appears when the case is inverted, and a pyramid-shaped Cour de Paris finish is applied to the outer circumference. SS case, size 28.3 x 47 mm, hand-wound. 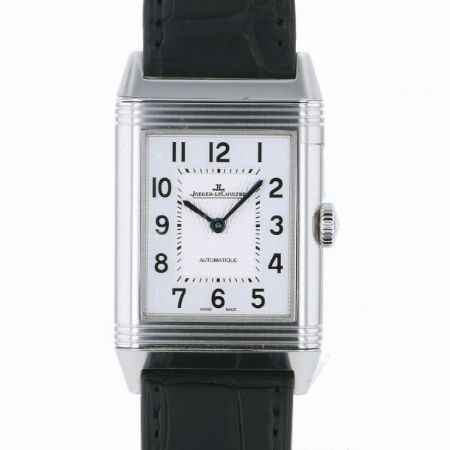 It is this model with a single face and the largest rectangular case that maximizes the presence of “Reverso”. The presence of “Reverso” specialty details such as the guilloche carving in the center of the dial and the Godron decoration on the top and bottom of the case stands out even more. High visibility due to its large size is also popular. SS case, size 27.4 x 45.6 mm, hand-wound. 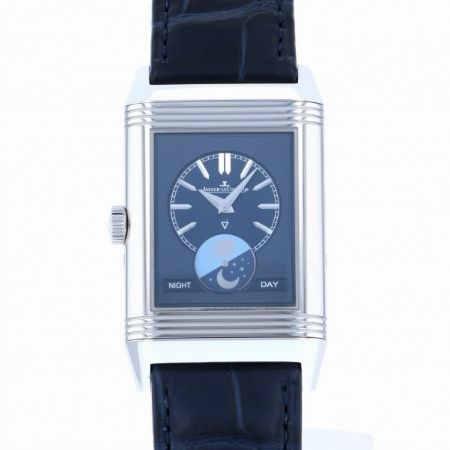 A derivative model of “Duo” that displays two times on the front and back. The silver dial has a moon phase and date display at 6 o’clock, and the blue dial has a night and day display at 6 o’clock. Even when the moon in the moon phase is expressed to the texture of the crater, you can feel the high aesthetic sense of this brand. SS case, size 29.9 x 49.7 mm, hand-wound. 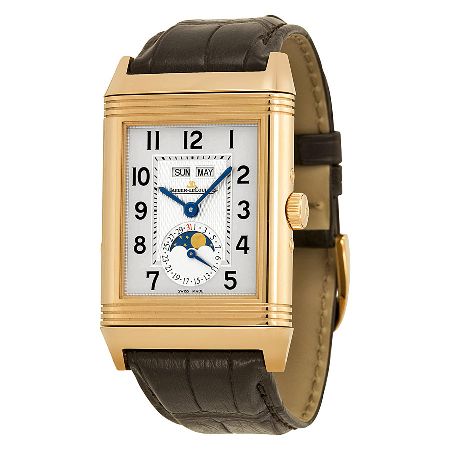 A single-face model equipped with a triple calendar function that displays the month, day, and day of the week, in addition to the moon phase that displays the age of the moon. The movement is an in-house caliber 843 boasting a power reserve of 45 hours. Since the back of the case has a see-through back specification, you can appreciate its appearance. 18K rose gold case, size 29.5 x 48.5 mm, hand-wound.

There are many other masterpieces of watch lovers. 8 selections of “Jaeger-LeCoultre” watches

As there are only brands with a long history, the collection is really diverse. In addition to the “Reverso” introduced earlier, the prestigious manufacturers such as the “Master” with a round case, the “Jaeger-LeCoultre Polaris” with its roots in diving watches, and the “Duometre” with an original mechanism. A collection that brings together wisdom will come together. 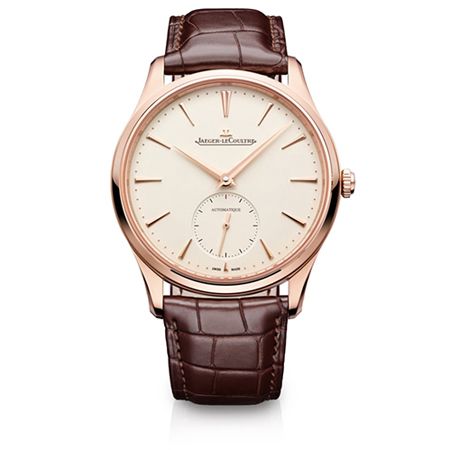 Since achieving the world’s thinnest caliber 145 in the early 20th century, thin watches have been a specialty of “Jaeger-LeCoultre”. Here is a masterpiece of the collection “Master Ultra Slim” that inherits that tradition. The ultra-thin case with a thickness of 8.1 mm, combined with the dial colored in egg shell beige, gives off an unbelievable elegance. Pink gold case, size 39 mm, self-winding. 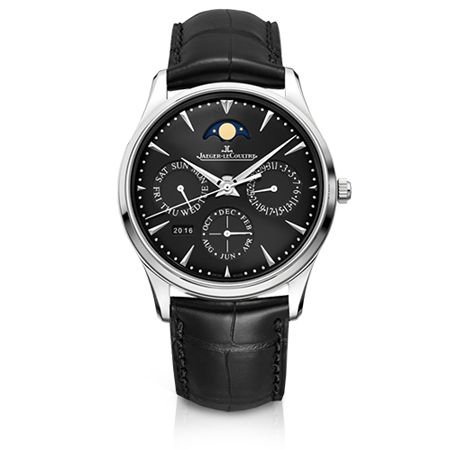 In the hands of “Jaeger-LeCoultre”, the perpetual calendar, which should be the most complicated mechanism, has an ultra-thin design with a thickness of 9.2 mm. In addition, it is equipped with a 4-digit year display at 7 to 8 o’clock. This model is a stainless steel version that has joined the ranks since 2016, and the black face, which can be said to be rare in the brand, strengthens the fearless image. SS case, size 39 mm, self-winding. 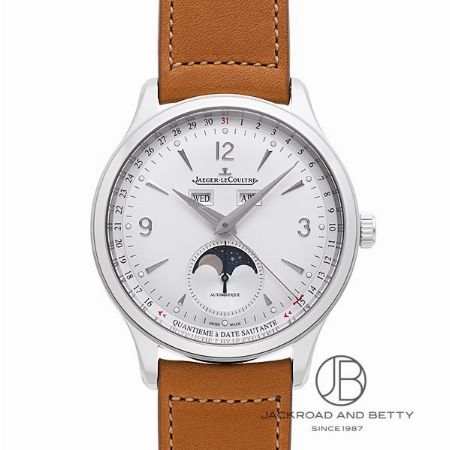 The new model of “Master (Control)” released in 2020 is equipped with a moon phase and a triple date display that displays the month, day of the week, and date. One of the highlights is the jumping date mechanism, where the hands jump between 15 and 16 days so as not to hide the moon phase. The movement is the caliber 866AA, which boasts a power reserve of 70 hours. SS case, size 40 mm, self-winding. 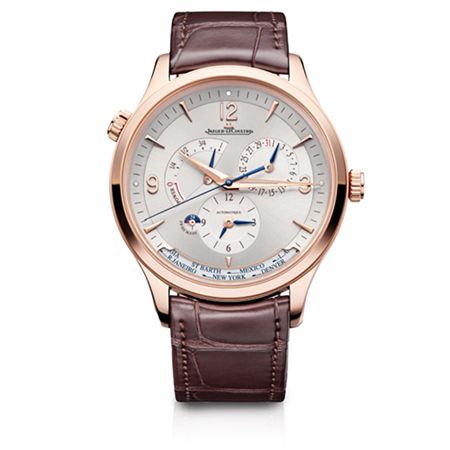 One of the collection “Master Control”, which is the origin of the name “1,000 hours control” mentioned above. Operate the city name at 6 o’clock with the crown on the upper left, and the indial above it will display the local time and day and night. It is also excellent in practicality, such as being equipped with an in-house movement that achieves a long power reserve of 70 hours. Pink gold case, size 40 mm, self-winding. 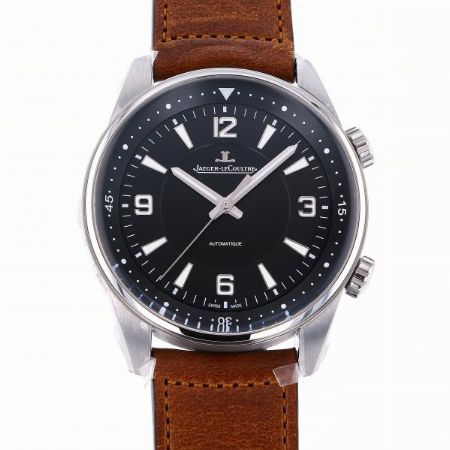 The collection “Jaeger-LeCoultre Polaris”, which inherits the name and design of the alarm-equipped diving watch “Memobox Polaris”, which was born in 1968, features a design that embodies sporty elegance. This is a popular work with 3 hands without date, which uses luminous paint, to strengthen the modern image. Operate the inner bezel with the upper crown. SS case, size 41 mm, self-winding. 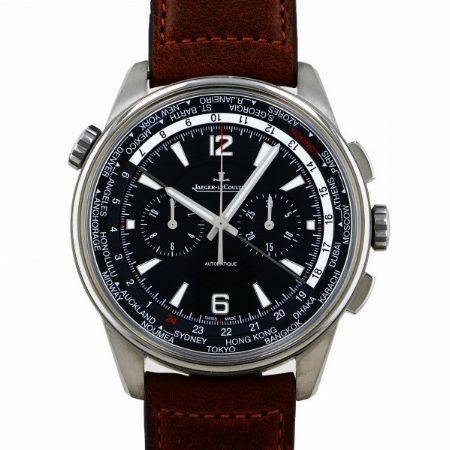 A chronograph inspired by the dive clock, which is the root of the collection. This “World Time” is equipped with a city name and a 24-hour ring instead of the inner bezel. You can read the time zones of 24 major cities in the world. Superluminova-coated hands and indexes ensure visibility in the dark. Titanium case, size 44 mm, self-winding. 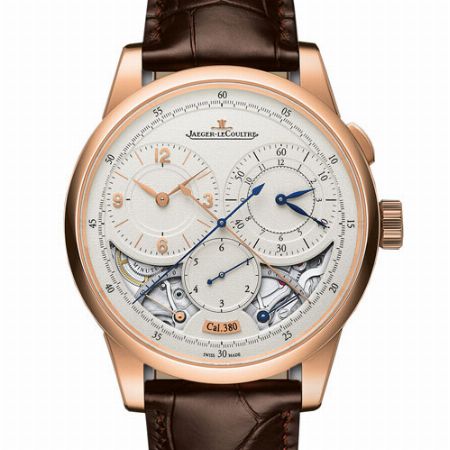 “Duometre” is a collection that boasts dual wings in which two independent mechanisms work together with one speed governor. Two barrels can be rolled up with one crown. The chronograph with dials on the left and right has an hour-minute coaxial totalizer on the right side, and you can appreciate the movement from the openings at 5 o’clock and 7 o’clock. Pink gold case, size 42 mm, hand-wound. 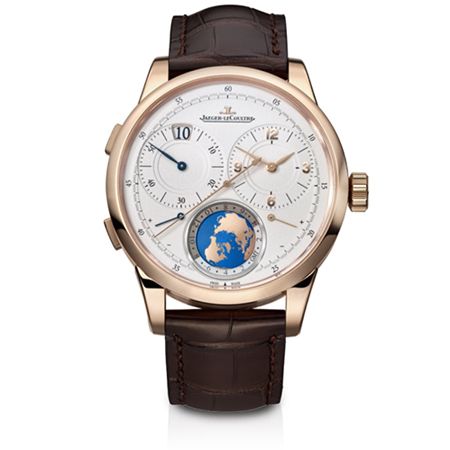 In addition to the world time display, a model equipped with a travel time display that can be adjusted to the minute unit at the same time. The disc-shaped map at 6 o’clock conveys the time of the world along with the distinction between day and night. The case back is a see-through back specification that allows you to see the finely decorated movement, and the surrounding area is engraved with the names of the corresponding 24 cities. Pink gold case, size 42 mm, hand-wound.