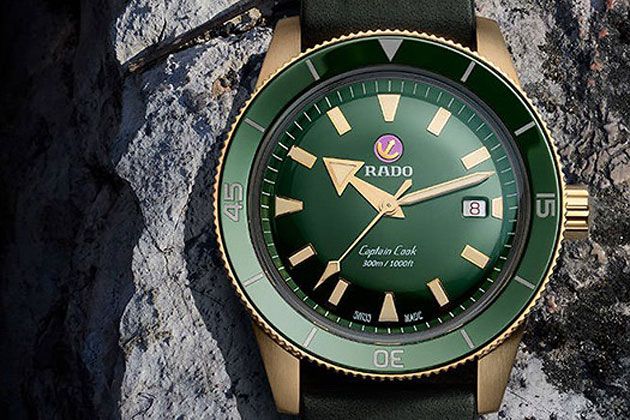 “RADO” is a specialty of the adoption of new materials and futuristic design. The prestigious advanced manufacturing that established the position of a luxury watch brand in the latter half of the 20th century is now attracting attention.

Also known as “material innovator”. If you want to feel the future of watches, “RADO” is the right choice. 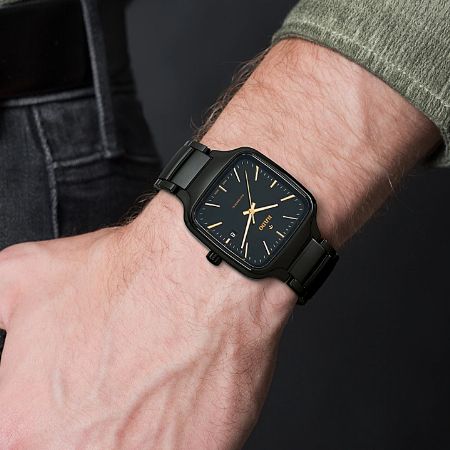 In the world of wristwatches, “RADO” has earned the title of “Master of Materials”. Since the announcement of the world’s first case using hard alloy hard metal in the 1960s, “Diastar”, we have been focusing on research and development of watches using new materials. After that, models using advanced materials such as “Integral” using high-tech ceramics were announced one after another. Its achievements deserve to be called the “material revolution” in the history of watches. 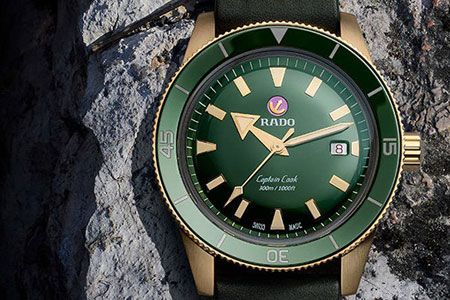 The appeal of “Rado” is not limited to materials. The brand’s proprietary design also emphasizes the appeal of advanced materials, such as the unique oval-shaped “Diamond Star” and the skyline-inspired square case “Manhattan.” He has also enthusiastically collaborated with world-famous artists and designers such as Andy Warhol and Jasper Morrison, opening up new horizons in design. “Rado” that overturns the existing common sense and heads for the future. The product continues to excite the hearts of watch enthusiasts, both now and in the past.

The driving force behind the resurgence of Rado’s popularity is the successive models that have been reprinted one after another over the last few years. Let’s take a look back at the timepieces of the past, along with the brand’s history over the past century.

The roots of “Rado” are “Schlupp and Company” established in Switzerland in 1917. Initially, he mainly produced movements under the three brothers Fritz, Ernst and Berner, and by the end of World War II, he had grown into one of the world’s leading movement makers. Later, with the addition of economist Dr. Paul Luthe, he turned to watch development.

In the 1950s, when watch sales started in earnest, the first original watch “Exact” was announced in 1956. The following year, the company name was changed to the current “Rado” and “Golden Horse” was announced. This model, which was epoch-making at that time and was waterproof to 12 atmospheres, was a big hit, and “Rado” made a leap forward to become a global brand developed in more than 61 countries including Europe, North America, South America and Asia. To achieve. 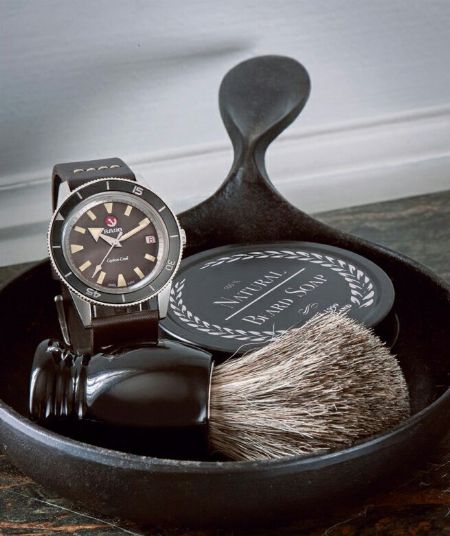 In 1962, he announced the “Diamond Star,” which should be the dawn of the material revolution. This was the world’s first “scratch-proof” combination of cemented carbide tungsten carbide and diamond’s next hardest sapphire crystal.

Also, in this year, one of the brand’s representative models, the diver’s watch “Captain Cook” was released. Featuring a black dial coated with Super Minorva, arrow-shaped hands and a rotating bezel for divers, this model is still very popular as the face of the brand’s sports model. 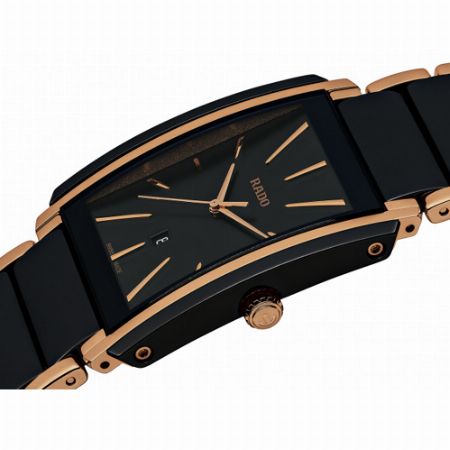 The decisive factor in earning the title of “Innovator of Materials” was “Integral” announced in 1986. The world’s first high-tech ceramics used in space shuttle heat shields, F1 car bodies, medical equipment, etc. are used in wristwatches. This material has outstanding lightness, scratch-resistant hardness, and is free from aging and metal allergies, making it highly practical as a wristwatch case.

Furthermore, in 1990, the case and bracelet were unified with high-tech ceramics, and the integrated model “Ceramica” was announced. Nowadays, this material is known as a watch case material along with stainless steel (SS) and titanium, but the brand that laid the foundation for it is “Rado”. 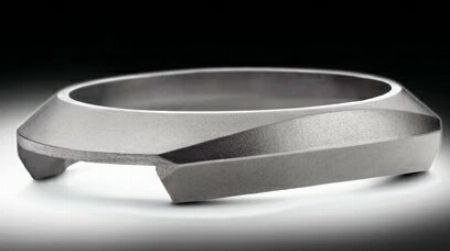 In 1993, an alloy named “Ceramos” was introduced. This is a material unique to Rado that combines the advantages of metal and high-tech ceramics, and the unique platinum-colored luster goes well with sharply designed cases and bracelets. In addition, it is super lightweight and easy to adapt to body temperature, so you can enjoy the comfort that you have never seen before.

The numerous material revolutions that Rado has achieved have not only developed the company, but have also made a significant contribution to improving the practicality of wristwatches. That’s why Rado is now one of the key brands in the watch world.

Three collections that are indispensable for talking about the current “Rado”

Speaking of the models that form the trunk of “Rado”, there are three types: “Captain Cook”, “Golden Horse”, and “True”. Every detail is a masterpiece that is alive with the attention to materials and design philosophy of “Rado”. 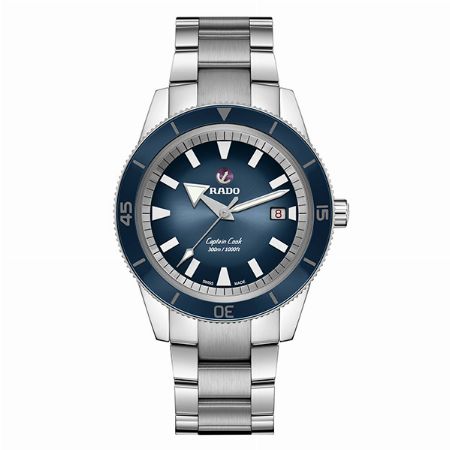 Named after the pioneering adventurer, Captain Cook, “Captain Cook” uses thick crystals to provide 720 feet (about 220 m) of outstanding waterproof performance at the time (1960s). It was a full-scale diver’s watch. The current model, Captain Cook Automatic, features a rotating bezel inlaid with high-tech ceramics and a box-shaped sapphire crystal. The case size has been updated to a well-balanced 42mm, and the waterproof performance has been brushed up to about 300m. The movement is the caliber ETA C07.611, which boasts a power reserve of approximately 80 hours. 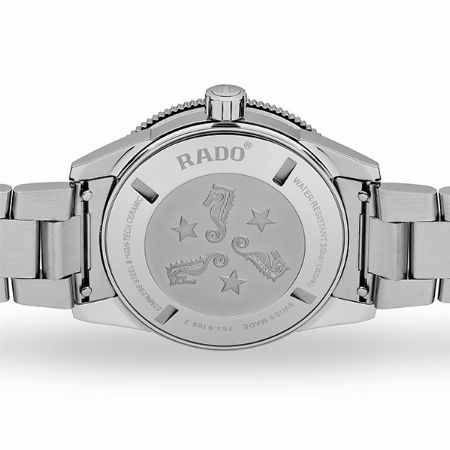 Wedge-shaped indexes, arrow-shaped hands, and sword-shaped minute hands provide excellent visibility. Super Minorva is applied to the hands and indexes to ensure visibility at night. Don’t miss the “rotary anchor” located at 12 o’clock. The anchor mark with the ruby ​​color as the background is a symbol of the brand that rotates according to the orientation of the wristwatch. 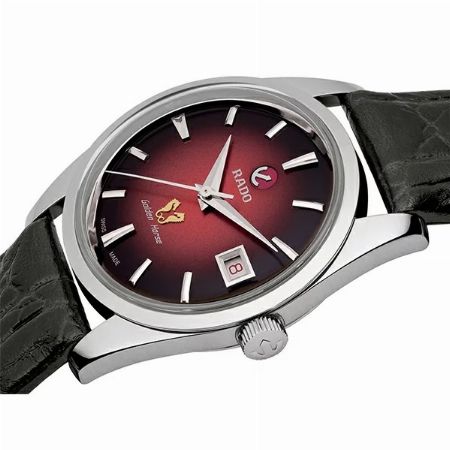 “Golden Horse” is a monumental collection that became the first model under the name of “Rado” that appeared in 1957. The original design of “Rado” such as the rotary anchor at 12 o’clock and the two seahorses at 6 o’clock is still fresh. This is the “Golden Horse 1957 Limited Edition” which is a reproduction of the legendary model. In addition to the iconic details mentioned above, the original is faithfully reproduced, including the Dauphin hands, wedge-shaped indexes, and red date display. On the other hand, the functional aspects have been updated, such as the box-shaped sapphire crystal and the 80-hour power reserve caliber ETA C07.611.

The origin of “Golden Horse” is a seahorse designed on the dial. Its English name is “Seahorse”, but it was named after it was designed in gold color. The case back of this model is designed with seahorses and stars, just like the original. Polished case and crown.

“Rado” is known for using high-tech ceramics for the first time in watch cases and bracelets. The brand’s most popular “True” is the current flagship collection with high-tech ceramics on the exterior. The “True Square Automatic”, which uses a square-shaped monoblock case, is particularly technologically appealing. It is extremely difficult to realize an integrated monoblock structure that is seamless with the back cover with a square case, and it can be said that it is a model that shows the brand’s outstanding technology. In addition, this model has a skeleton specification that allows you to see the movement by boldly hollowing out the dial. You can see the true value of “Rado”, which is one step ahead of the watch world. 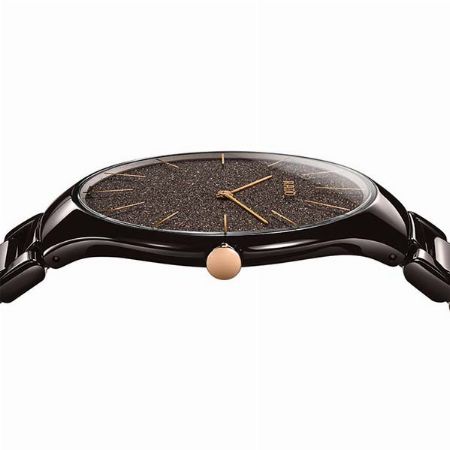 There are other models that show off the advanced technology of “Rado”. For example, “True Thin Line” has the “thinnest” monoblock ceramic case in the history of the brand. The thickness is only about 5mm, and the built-in quartz movement is about 1mm! It looks delicate, but high-tech ceramics ensure it is durable and scratch-resistant.

Classic and cutting edge. The lineup of “Rado” that bears both axes

There are only brands with a history of over 100 years, and the lineup is truly diverse. In addition to the three major collections introduced earlier, there are many masterpieces such as “Integral” and “Ceramica” that make a name for themselves in the history of watches. The classic and cutting-edge timepieces are a great styling accent. 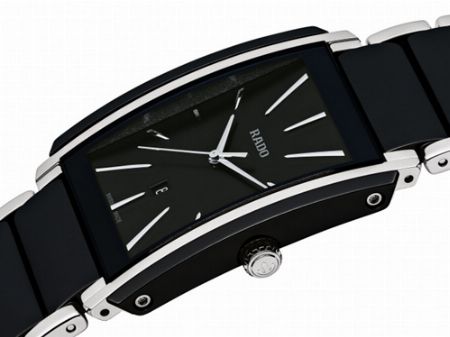 Released in 1986, “Integral” is the world’s first wristwatch made of high-tech ceramics. In addition to its high practicality such as light weight and resistance to scratches, it does not easily change over time, so it has the advantage of maintaining a new-like texture for a long time. Here, the original appearance and operability are kept as they are, and the design has been updated to suit modern users. A cooler, toneder look will fit nicely into suit styles and modal styling. Size: 31 x 41.1 mm, high-tech ceramics x SS case, quartz. 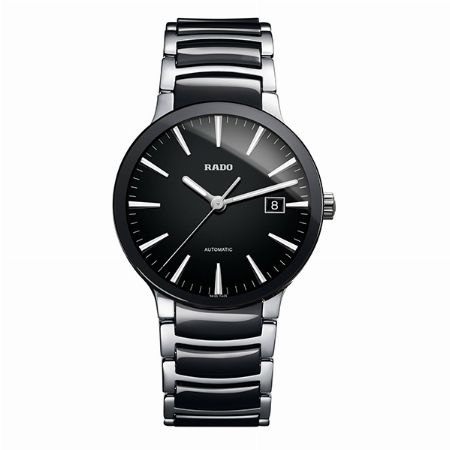 The appeal of the “Centrix” collection, which is one of the most popular collections in “Rado”, is its design that combines simplicity and elegance. The matte texture of the material adds a modern essence to the graceful round form. The lightweight bracelet, which combines high-tech ceramics and stainless steel, has an excellent fit and is comfortable to wear. With a wide variety of designs, you’ll find the one that suits your taste. Size: 38mm, SS case, quartz. 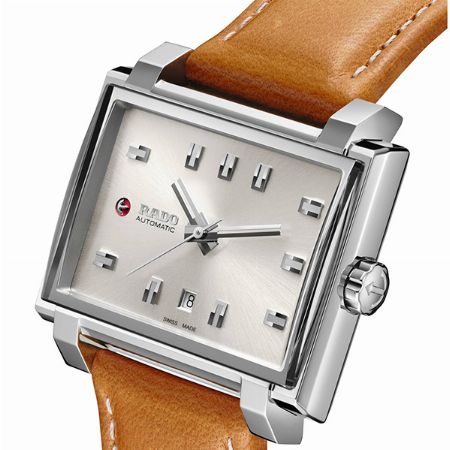 From the “Tradition Collection”, which has a design that pays homage to the archive and functionality that corresponds to the future. The base of this model is “Manhattan” released in 1965. Inspired by the New York skyline, the design is a geometric design with a silver-colored dial in a rectangular case, square hour and minute hands, indexes, date display, and a red rotary anchor for the icon. Is characteristic. Size: 35 x 28 mm, SS case, self-winding. 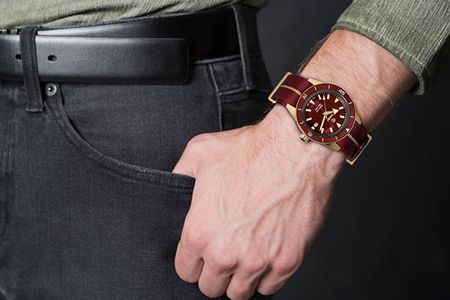 The masterpiece divers that appeared in 1962 are now in season “bronze”. The matte bronze case is also impressive, but the bezel is noteworthy. It has been said that it is extremely difficult to realize the red color of bronze with high-tech ceramics, but the watchmakers at the head office of “Rado”, Mungnau, Switzerland, have succeeded in achieving it! This model uses bronze-colored high-tech ceramics for the bezel insert. The strap is a NATO strap with the same color tone on the case and dial. Size: 42mm, bronze x SS case, self-winding. 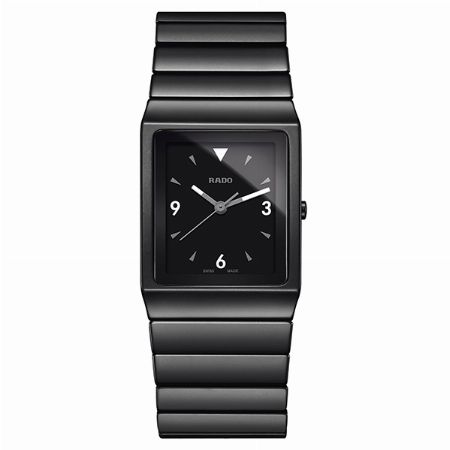 Released in 1990, “Ceramica” is one of the masterpieces of “Rado” with an integrated high-tech ceramic case and bracelet. This is a model redesigned by German industrial designer Konstantin Grcic. The black dial, which combines wedge-shaped indexes and Arabic numerals, creates a modern atmosphere. The reason why it is so popular is that it is light and comfortable to wear, which is unique to high-tech ceramics. Size: 30 x 41.7 mm, high-tech ceramics, quartz. 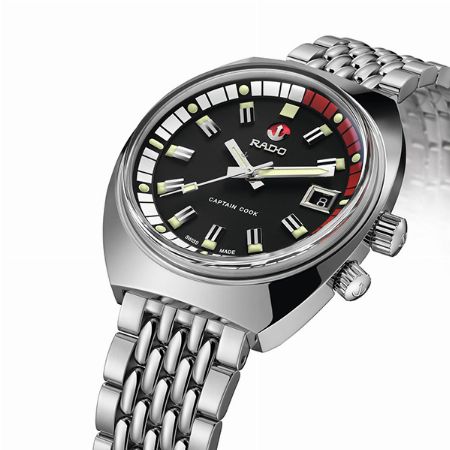 The one that reproduces the appearance of the original model of “Captain Cook” follows the details of the time such as the red x white internal bezel, but the black dial and rhodium color index imbue with a modern image. It also features an easily replaceable strap system, which comes with a stainless steel 7-strand rice grain bracelet and a black NATO strap. Equipped with caliber ETA C07.611, a mechanical movement that boasts a long reserve of up to 80 hours. Size: 37mm, SS case, self-winding. 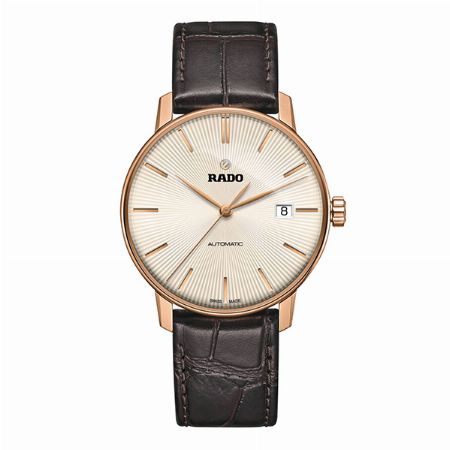 “Rado” has a strong image of cutting-edge design, but it is also good at classic design because it is a brand with a long history. For example, the “Kupole Classic” inspired by the popular models of the 1960s. An elegant dial with a vintage look and champagne gold will tickle the hearts of adults. The windshield uses sapphire crystal with anti-reflection AR coating on both sides. Achieves high visibility and vivid brilliance. Size: 37.7 mm, SS case, self-winding. 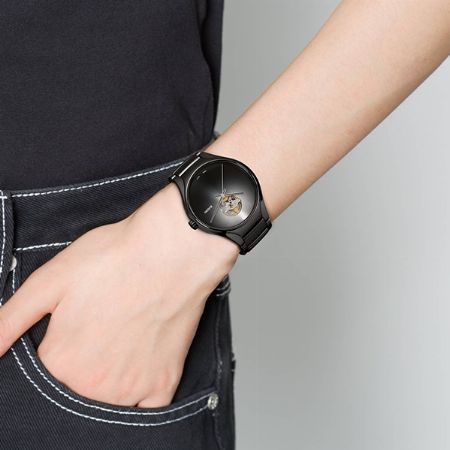 Among the flagship collections that use high-tech ceramics, “True Secret” stands out. The minimalist design of the dial, colored in jewel tones, is cut out at 12 o’clock, from which you can appreciate the mechanical movement Tenwa. It also features a high-tech ceramic case and excellent scratch resistance due to the sapphire crystal, so you can use it in your daily life without hesitation. Size: 40mm, high-tech ceramics, self-winding.