The season when short sleeves play a leading role is the season when the impression of the arm becomes a little lonely. Even work clothes are no exception, and the spread of remote work has spurred casualization these days, and it is becoming more common to go to the office wearing polo shirts or shirts. Casual clothes can be solved by using accessories, but work clothes will not. A wristwatch that tells the calm and high quality is useful at such times. I want to wear one carefully selected and maintain the right balance to face the business. The new series “Style 60’s” of “Seiko Presage” came to the fore at the perfect time when I began to be aware of such things.

As you can read, this is a mechanical watch that reproduces the vintage style of “Seiko” in the 1960s. There are 6 models in the lineup, all of which are based on the first domestically produced chronograph called the “Crown Chronograph” released in 1964. These are reproductions of archive designs that were full of innovative designs at the time, including dials with wide closeouts and high visibility. In addition, the circle-shaped embossing of the index further improves visibility and adds a modern impression. The exquisite update feeling that makes you feel a vintage taste but does not lean too much retro is a work unique to a long-established manufacturer that will be the 140th anniversary of this year. It fits comfortably in modern work clothes with a high degree of casualness, yet it brings outstanding calmness. 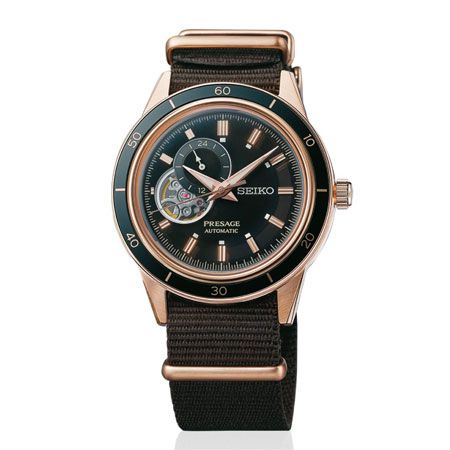 The 6-inch lineup is divided into two types: a simple 3-needle type and a semi-skeleton type that allows you to appreciate a part of the movement from the opening, and each has 3 color variations. The former 3-needle type uses a self-winding caliber 4R35 for the movement, and the calendar function adds practicality. It is a proven mechanism used in many models. The latter semi-skeleton type is equipped with caliber 4R39 and has an open heart specification with a skeleton window at 9 o’clock. In each case, you can wear an authentic mechanical watch with a design that lives up to the tradition of “Seiko” and a reliable movement from the 50,000 yen level including tax. 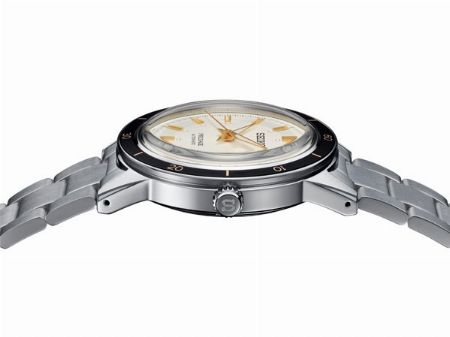 The highlights on the details that you are interested in stand out more clearly when compared to the original model. The model with the silver index above is the “Crown Chronograph” that was the basis of the design. The box-shaped windshield that became the mainstream in the 1960s was quickly adopted, and the solid Dauphin hands are also designed to make you feel the style of the time. On the other hand, the new series “Style 60’s” takes advantage of these details, but the rounded case is slightly tilted inward so that you can wear it more comfortably on your wrist. Designed to. A mirror-finished surface has been added to the foot to give it a modern and sophisticated look. By the way, regarding the color scheme of the dial, ivory looks like the original “crown chronograph”, but green is also a reproduction of the earth color that was popular in the 1960s. In addition, the nylon strap, which was first adopted as “Seiko Presage”, has a fearless and sporty appeal, and has a refreshing texture in the sweaty season. All of them are timepieces that satisfy the elements that I wanted in the coming season, so it seems that I will be able to leave my arms as if I was on a big boat.