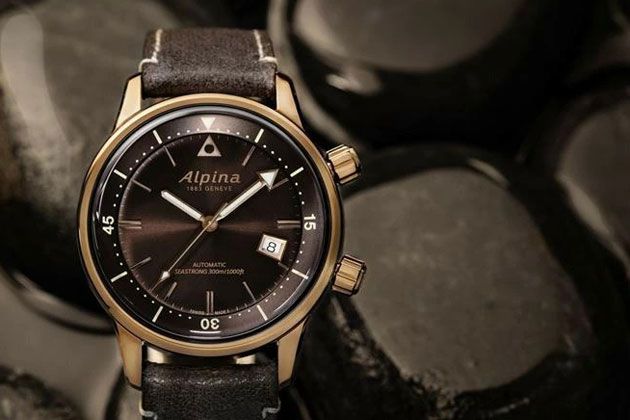 Since its founding in the latter half of the 19th century, “Alpina” has been the royal road for sports watches. Its special brilliance is backed by the history of making watches for land, sea and air professionals.

A prestigious sports watch that has been around for 130 years. “Alpina” watches are hot 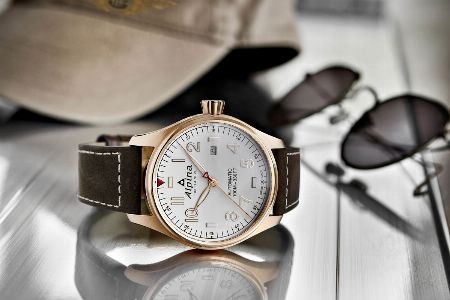 In the recent watch boom, sports watches are receiving the hottest attention. Not only does it go well with casual watches, but with the trend toward more casual business styles, the superiority of sports watches that can be used regardless of whether they are on or off is steadily increasing. Among the brands that specialize in such sports watches, “Alpina” is likely to rekindle the boom in the near future. Founded in Geneva in 1883, the brand continues to make watches for professionals such as pilots, divers and climbers who challenge the harsh natural environment under the concept of “modern Swiss sports watches”. .. Even now, under “Citizen”, we have released a sports watch that has both high quality and functionality. One of the reasons for its popularity is the affordable pricing, which ranges from under 100,000 yen to 200,000 yen.

The craftsmanship behind the turbulent history. Why Alpina watches stick to professionals

The roots of “Alpina” are in the union of watchmakers founded in Geneva, Switzerland in 1883. The business expanded and in the early 1900s a factory was established in Glashütte, Germany. The “21 Marine Watch” was adopted by the German Navy, and at one point it was proud of the momentum that threatened German watch makers. When World War I broke out, the organization of “Alpina” that had a pipe with Germany was dissolved, but with the end of the war the company grew rapidly again, and in 1933 the patented waterproof function Succeeded in developing the sports watch “Blockware” equipped with. In 1957, we announced the “Alpina President” equipped with our own self-winding movement.

However, “Alpina” has a second trial. The quartz shock that occurred in the 1970s caused financial difficulties and stopped activities. However, the voice that misses the name is deep-rooted, and the business is inherited by Peter Stas, the founder of “Frédérique Constant”. And “Heritage” and “Star Timer” announced at the 2003 Basel Fair attracted a lot of attention among watch fans and became a hit. The new Alpina, which has been revived from a four-and-a-half-century dormant period, became part of Citizen in 2017 and began to mark a new history of luxury sports watches.

These 3 collections are men’s watches you can buy now. 15 carefully selected models of “Alpina”

The fields covered by “Alpina”, which has a history of more than a century, covers land, sea, and air. Diver’s watch “Sea Strong”, pilot watch “Star Timer”, Alpine sports compatible “Alpiner”. We have selected 15 “must buy now” from the three major collections that represent the brand.

▼ Line 1: A wristwatch dedicated to professionals in the sea. “Sea Strong” is an adult diver

Diver’s watch “Alpina 10” released in 1969. The model with a 20-bar water resistant super compressor, an integrated spring mechanism to prevent damage to the sealing ring, and a rotating bezel with a built-in case is one that makes a name for itself in the history of divers’ watches. “Sea Strong”, which inherits the DNA of such a masterpiece, is a collection that gains tremendous trust from professionals who challenge the sea.

The chronograph of “Sea Strong Diver” has an eye-catching big date at 6 o’clock with excellent visibility. The coloring is also excellent, and the dark blue anti-reverse bezel, strap and dark color dial reminiscent of the deep sea create a fearless image. In addition, the red used for the needle creates a vivid color effect. The crown, which is also an accent of the design, is a screw-in type with enhanced waterproofness. Water resistant to 30 bar. SS case, size 44 mm, quartz type. 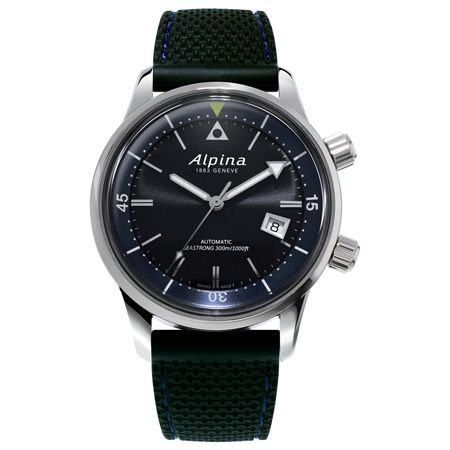 If you want to enjoy the authenticity of the brand “Alpina”, this is the diver’s watch. A reprint model based on the highly popular “Alpina 10” released in the 1960s. The design with a rotating bezel inside the case to check the dive time looks fresh even now. This inner rotating bezel can be easily adjusted with a screw-down crown at 2 o’clock. The strap is also made of water-resistant rubber. Water resistant to 30 bar. SS case, size 42 mm, self-winding. 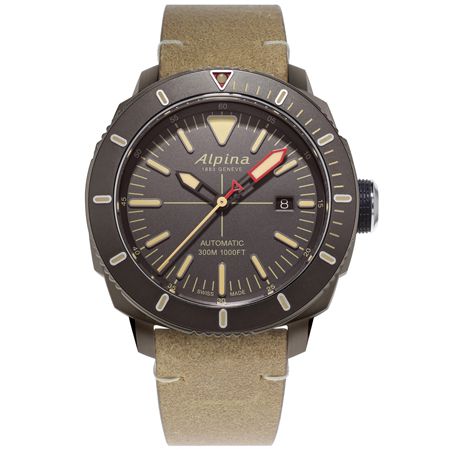 If you like rugged divers’ watches, the Seastrong Diver 300 is a strike. The simple face and military colors that are typical of retro divers combine to create a masculine mood. Luminous paint is used on the bezel and dial indexes for excellent night visibility. The back cover is see-through, so you can enjoy the movement of the self-winding movement, which boasts a power reserve of 38 hours. Water resistant to 30 bar. SS case, size 44 mm, self-winding. 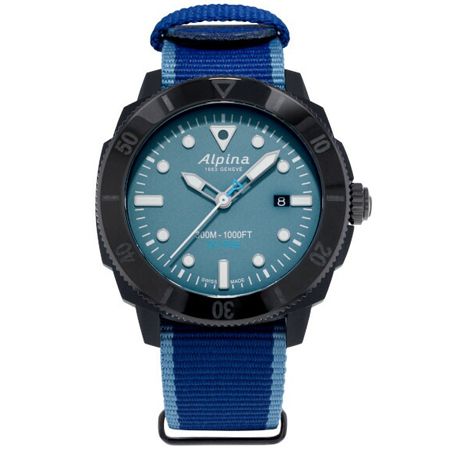 “Alpina” supports the Surfrider Foundation Europe, an NGO established by French surfers for the purpose of protecting the marine environment. This model is one with the theme of marine plastic waste, which has become a serious problem in recent years. The recycled plastic used in the case is reinforced with glass fiber based on plastic fragments caught in fishing nets in the Indian Ocean. Water resistant to 30 bar. SS case, size 44 mm, self-winding. 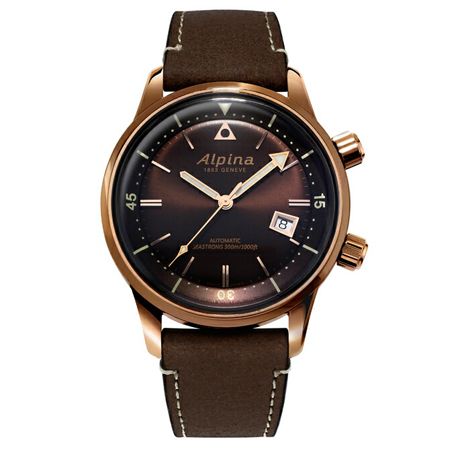 The mainstream design of diver’s watches is to push the sporty taste to the front, but “Sea Strong Diver Heritage” sets it apart from the others. For example, in this model, the case, dial, inner rotating bezel, and even the strap are unified in brown, giving an elegant impression unlike a diver’s watch. The case is made of stainless steel with bronze color PVD processing. Water resistant to 30 bar. SS case, size 42 mm, self-winding.

The most popular coloring among men’s watches is all black that tightens the wrist. This popular color is also available in the “Sea Strong Diver 300 Big Date Chronograph” of “Alpina”. From the dial to the bezel, case and rubber strap, all black. In addition, the index and hands with fluorescent paint add color effect and masculine essence. Water resistant to 30 bar. SS case, size 44 mm, quartz type.

Boasting the high quality and precision unique to Swiss watches, “Alpina” was highly evaluated in the aviation industry and supplied pilot watches to the air forces of European countries for a long time in the first half of the 20th century. Backed by such history, “Star Timer” is the most popular collection of “Alpina”. It is also famous as a favorite watch of Michael Goulian who is active in the Red Bull Air Race. 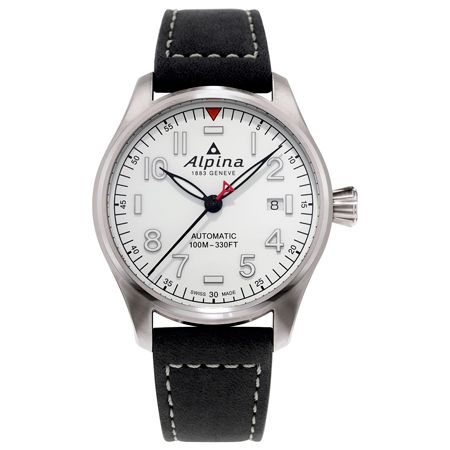 If you are looking for one that is easy to incorporate into your styling and that you will never get tired of, this model that makes you feel the origin of the pilot watch of “Alpina” is your favorite. The pilot watch, which features a large index with luminous paint and a white dial, is exactly “The Basic” of “Alpina”. With the help of a small 40mm case with a modest claim, it will be an almighty one that matches a wide range of dresses. SS case, self-winding. 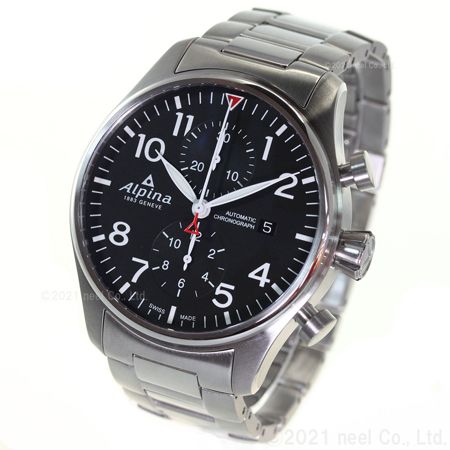 A chronograph where you can enjoy the functionality of the pilot watch that was famous in the European Air Force. High visibility is the number one reason for being favored by sky professionals. The large Arabic numeral index and hands make it possible to read the time instantly. In this work, the contrast created by the black dial and the white index and hands enhances visibility. The sophisticated image created by the stainless steel case and strap is also attractive. SS case, size 44 mm, self-winding.

The dial design with high visibility is the biggest feature of “Alpina”, but the detail that can be said to be the ultimate is the big date at 6 o’clock. You can check the date at a glance as well as the time. This chronograph equipped with a big date has an index and hands with fluorescent paint and a black dial to create a vivid contrast. At 12 o’clock, one of the icons, the triangle, is designed. SS case, size 44 mm, quartz type.

The “Star Timer Collection” also has a lineup of models equipped with GMT. The disc placed in the center of the dial is displayed in GMT, and the 24 scales are read by a triangular index. The base is a pilot watch released in 1970, featuring a case called a cushion type and a bar index. The upper crown is for the inner bezel, which has a 24-hour scale, and a screw-down crown is used to prevent erroneous operation. SS case, size 42 mm, self-winding.

The “Star Timer Pilot Big Date Chronograph” features a triangle at 12 o’clock and a big date at 6 o’clock. Because it is a quartz type, the price is a little lower than other mechanical models. Therefore, it is also a recommended model as a first choice. With a black dial and white indexes, this model has a stainless steel case and strap to accentuate its stylish image. SS case, size 44 mm, quartz type. 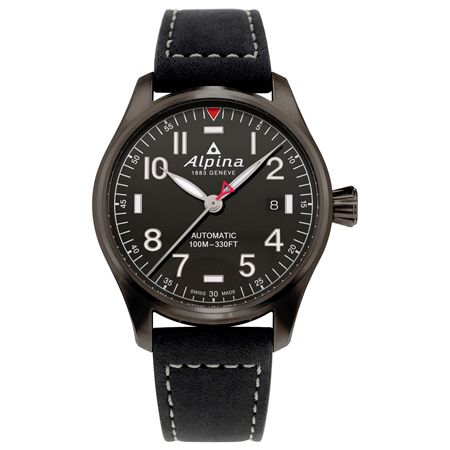 There are also variations like this in “Star Timer Pilot Automatic”. The dark color design, which contrasts with the white dial model introduced earlier, gives off a masculine aura. The dial is matte dark gray, and the case is gun metallic with titanium-colored PVD processing. The red triangle of the brand icon at 12 o’clock and on the second hand also shines brightly on the dark dial. SS case, size 40 mm, self-winding.

▼ Line 3: Modern sports watch “Alpiner” that inherits the DNA of the masterpiece

The first Swiss-made sports watch “Alpina 4” announced in 1938. With four functions: magnetic resistance, impact resistance, waterproofness, and stainless steel, this model was a masterpiece that could be used in all alpine sports, from mountaineering to diving in high-altitude lakes. “Alpiner” is a collection that follows the concept of such a masterpiece and aims at the highest peak of wristwatch technology. 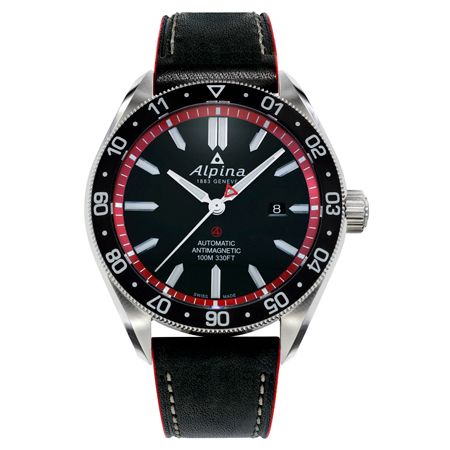 “Alpiner 4 Automatic” has a stylish look that matches beautiful clothes, but has specifications that can be relied on even in harsh fields such as magnetic resistance, impact resistance, and waterproofness. The design is based on black, and the red on the flange of the dial and the edge of the leather strap gives it a vivid color. Equipped with a mechanical movement that boasts a 38-hour power reserve. The strap is made of leather that is familiar to the skin. SS case, size 44 mm, self-winding. 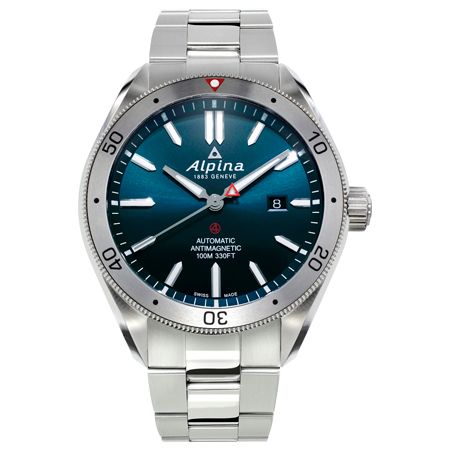 The sporty “Alpiner 4 Automatic” wears a silver-colored stainless steel strap for an elegant atmosphere. With the help of bar indexes and sharp needles that enhance visibility, it also matches a solid suit style. Glacier blue colors the glossy sunray-finished dial. This is the brand’s signature color and the symbol of the Geneva Manufacture. SS case, size 44 mm, self-winding.

A leather strap version of the “Alpiner 4 Automatic” with a Glacier blue dial. The combination of a stainless steel case and a dark brown leather strap is a versatile piece that matches both suits and denim. In addition, the strap accented with white stitching has a bright red color on the back and edges. The bezel and the red triangle of the second hand resonate with each other, creating a swanky atmosphere. SS case, size 44 mm, self-winding.

Already advanced in the home country. Expectations for breakthroughs in the smartwatch field

“Alpina” is also focusing on the development of smart watches. In Japan, we released a model named “Orological Smart Watch” in 2018. It has various functions such as phone calls linked with PCs and smartphones, incoming notifications for SNS, and activity tracking that records the number of steps and calories burned, but the design is a hybrid model called a traditional sports watch. There are also models such as “Alpiner X” that has a function to detect and display the amount of ultraviolet rays with a UV sensor. Keep an eye on the prestigious “sports smart watch” that is pioneering a new horizon.