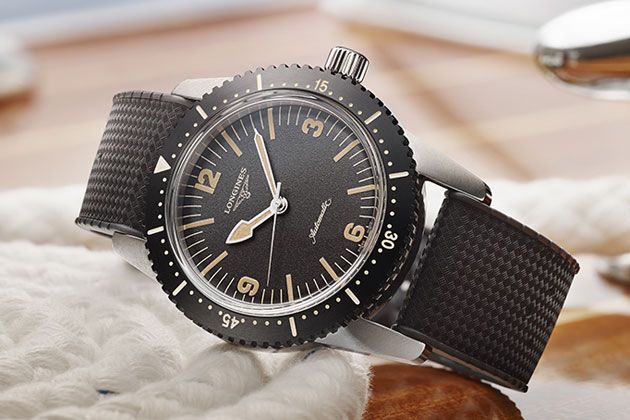 A reprint watch that has become a major trend in the watch world these days. The “Heritage” series of the well-established Swiss “Longines” that has been the driving force behind that scene has all the watches you want now.

The modern age of the reprint boom. A truly remarkable lineup is in Longines 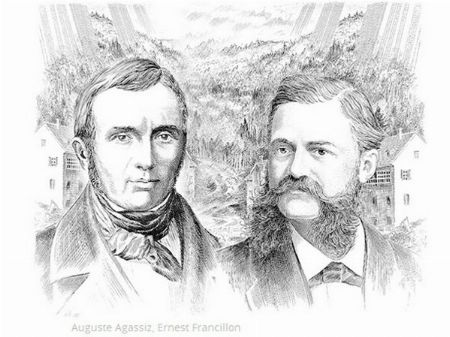 The reprint of the legendary model of each brand that has made a name for itself in the history of watches has become a staple of the watch world. It has become a candidate as the first one for beginners. The world is truly a “reprint” era. Speaking of reprinted models until a long time ago, the mainstream was to incorporate the original essence and the details were arranged in a modern style, but nowadays, the model is faithfully reprinted up to the modeling, and only the contents are modern specifications. To the standard. The “Heritage” series of “Longines” was the first to set the example.

A long-established store in Switzerland. What is the “Heritage” series unique to “Longines”? 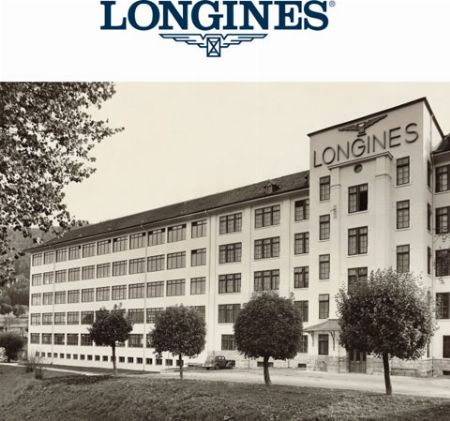 “Longines” is a well-established Swiss watch maker known for making epoch-making inventions one after another in the course of more than 180 years. In 1878, the world’s first chronograph with a built-in column wheel was announced. In 1931, the pilot watch “Hour Angle Watch” that can measure the latitude and longitude (current location) of an aircraft, and in 1937, the world’s first flyback chronograph equipped with a waterproof push button. In an era when wristwatches evolved rapidly, “Longines” was at the very center of it. 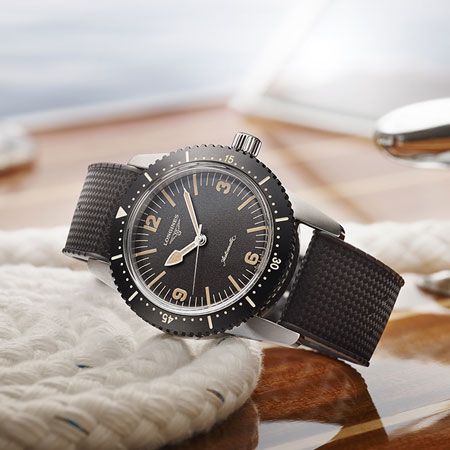 “Heritage” appeared in 2009 as a series that reproduces many masterpieces born in the golden age of “Longines”. While faithfully reproducing the quaint design of the time, the materials and details of the case and windshield are generously introduced with modern technology that has been refined over many years. As a result, an elegant watch that does not feel old-fashioned has been completed, and it is gaining tremendous popularity from adults who seek personality and universality.

First of all, pay attention to these three models. Masterpieces representing the “Heritage” series of “Longines”

Because it is inseparable from the history of the brand, there is a masterpiece that should be noted first. First of all, let’s know these three models in order to understand the charm of the “Longines” brand as well as the charm of the “Heritage” series.

A masterpiece of the 1960s divers. “Longines Legend Diver” that contributed to the spread of divers’ watches 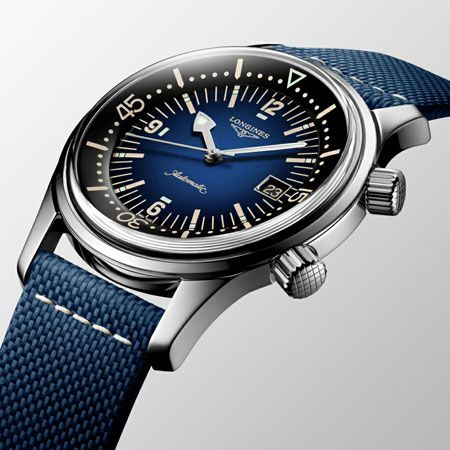 Many people think of “Longines” as chronographs and pilot watches. That’s true, but in the 1940s, it contributed not a little to the development of divers’ watches, such as the development of military diving watches. Among them, the Twin Crown diver’s watch, Ref.7042 (first half) / 7494 (second half), which was born in 1959, is still a legendary watch that symbolizes old divers. The biggest feature is the case, which is equipped with “Super Compressor” which is an evolved version of the epoch-making waterproof case “Compressor case” developed with EPSA, a case specialist manufacturer that existed in Switzerland at that time. This case has also been supplied to Swiss brands such as “IWC” and “Jaeger-LeCoultre”, and has been a catalyst for the spread of divers’ watches since the 1960s. 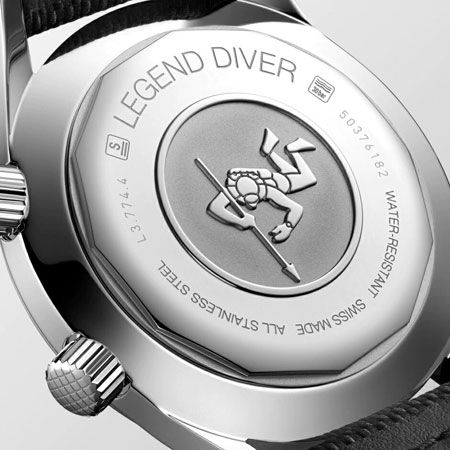 The reprint “Legend Diver” almost faithfully reproduces the characteristics of Ref.7042 (first half) / 7494 (second half). Not only the design of the rotary inner dial and index, but also the relief of the back cover. The engraved diver’s design is based on the motif of spearfishing, which was popular at the time. The angle of the rug has been slightly changed to improve the wearing feeling.

By the way, the model in the photo is a new work released in 2021. We have adopted a dial with a gradation color that was not available at that time, but of course, the same black dial as at that time is also available. 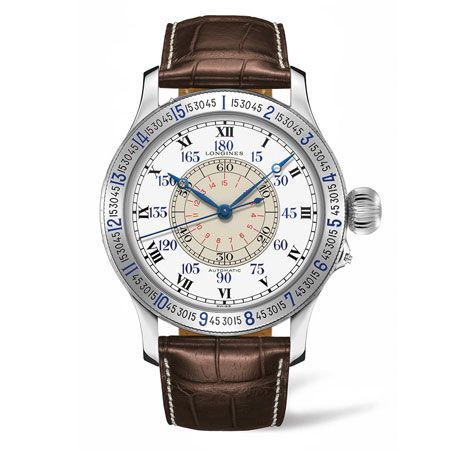 Known as the “Heritage” series, the “Hour Angle Watch” is one of the most important models in the history of “Longines”. The origin of this watch was the idea drawn by Charles Lindbergh, the great pilot who succeeded in the world’s first solo flight without landing in the Atlantic Ocean in 1927, after the achievement of the feat. In the coming era of long-distance flight, pilots will need a watch that can know their current position at sea without targets. This work, which was born in 1931 from such an idea, realizes it by reading the hour angle from the position of the hands and the scale of the bezel. It was a revolutionary invention at the time when there was no GPS. 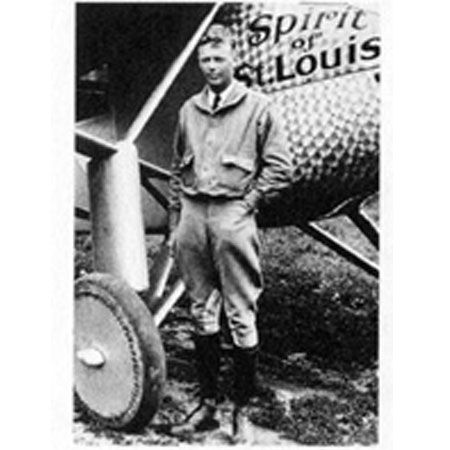 The model was first reprinted in 1987, the 60th anniversary of Mr. Lindbergh’s achievements. There is no doubt that it was a pioneering model leading to the current “Heritage” series. This latest model almost faithfully reproduces the style of 1931. The case diameter is 47.5 mm, which is the same as the original, making it a very strong one. 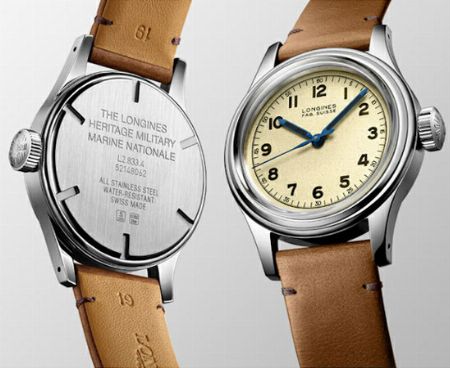 As mentioned above, “Longines”, which is a brand closely related to military, has abundant masterpieces of military watches. Various models have been reprinted in the “Heritage” series so far, but in recent years we have been particularly focusing on it, and the fidelity of “Do you want to do that!” Surprise vintage enthusiasts. The “Longines Heritage Military” Marine National “” is a reproduction of a wristwatch for the crew of a ship, which was produced at the request of the French Navy in 1947. The French word “Made in Switzerland” under the logo tickles the enthusiast’s heart. 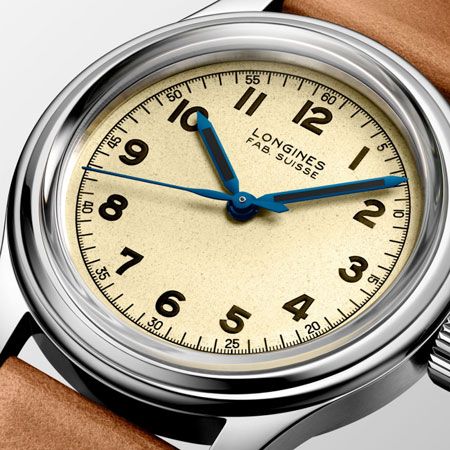 While reproducing the original, such as the step bezel with steps, the typeface of the index, and the pencil needle, only the case diameter has been increased to the modern 38.5 mm. It can be said that the attractiveness has increased because it has become a size that is easy to wear even in everyday life. What is unusual is that it expresses the deterioration of the dial over time, which is a perfect reproduction of the black spots found on antique watches. In addition, the screw-in back cover is thoroughly reproduced to the shape of the indentation where the opener is applied. The essence of “heritage” is the workmanship that is extremely rare here.

There is something to tell about each. 8 recommended “Longines” and “Heritage” series

Each one has a deep history, and the “Heritage” series of “Longines” will satisfy your desire for ownership. From here, we will introduce carefully selected 8 recommended books of the same series. 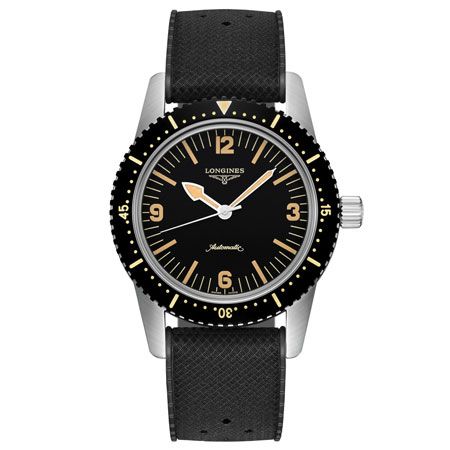 A reprint model of the brand’s first diver’s watch released in 1959 prior to the aforementioned “Legend Diver”. The dial with the numbers 12, 3, 6 and 9 expresses the aging condition such as the burning condition of the luminous paint and the roughness of the paint, and is reproduced in modern times including the vintage atmosphere. The simple style with its powerful large hands stands out is like a classic diver’s watch. The caliber is equipped with the L888, which has a power reserve of 64 hours. 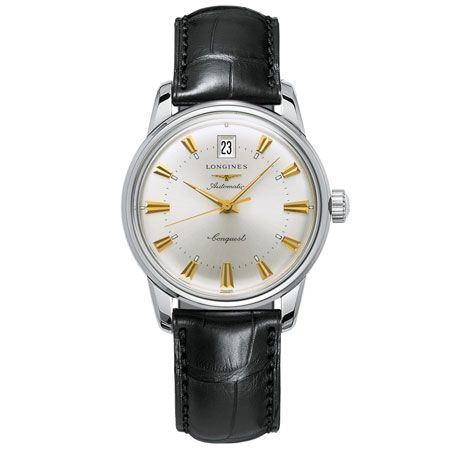 The original was born in 1954. The dial is curved and has a three-dimensional look combined with the applied index. The dome-shaped windshield that supports the vintage taste is intentionally made of plastic material, faithfully reproducing the atmosphere of the time. Don’t miss the Cloisonne ware emblem embedded in the case back. It is a 35mm diameter that fits comfortably on the sleeves of the jacket. 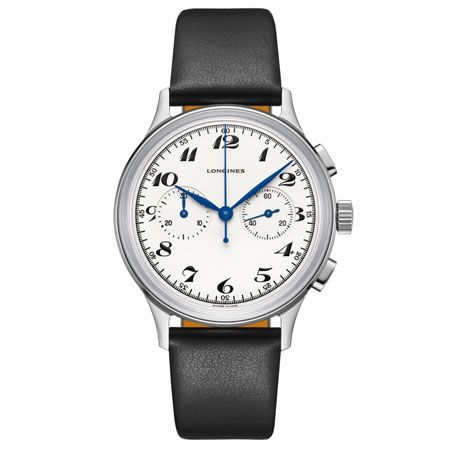 As the name suggests, this is a classic two-counter chronograph that has become more popular in recent years, based on an archive from around 1946. Strictly speaking, although there are differences in details such as the sub dial being reversed on the left and right, the original is equipped with the exclusive caliber L895.5 of “Longines”, and the glass is made of non-reflective sapphire crystal glass. You can see certain updates such as. Although it is a classical chronograph with a diameter of 40 mm, it is a practical one that can be used in everyday life. 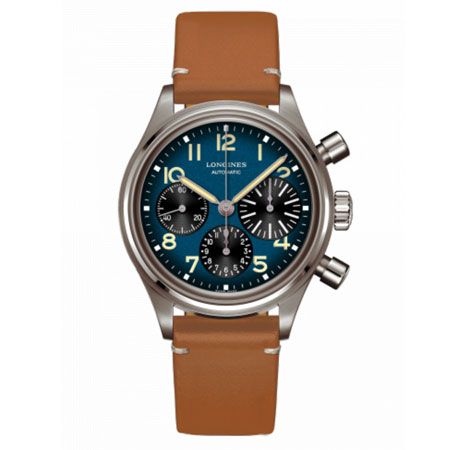 The nickname “Big Eye” comes from the 30-minute counter at 3 o’clock, which is designed to be larger than the others. A model that faithfully reproduces the original, wearing the atmosphere of the 1930s when the aviation era has arrived, won the Revival Award at the “Geneva Watch Grand Prix 2017”. This is a reprint of it, with a lightweight grade 5 titanium case and a blue gradation dial. While keeping the style faithfully, it seems that you can wear this one with different materials and colors regardless of the scene. 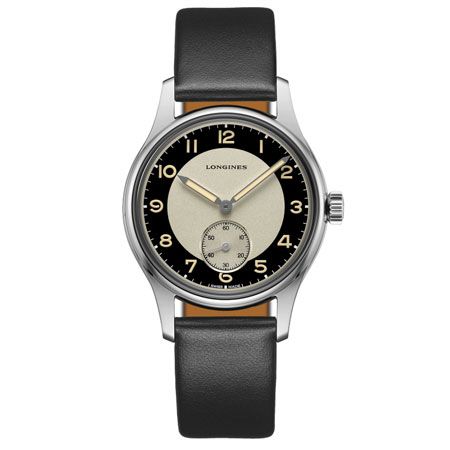 It just appeared as a new work in 2020. As you can see from its classic appearance, this model was inspired by the masterpieces of the 1940s. The black and white two-tone dial is just like a black tie. The original case diameter is as small as 35mm, but it has been increased in size to 38.5mm to meet modern needs. 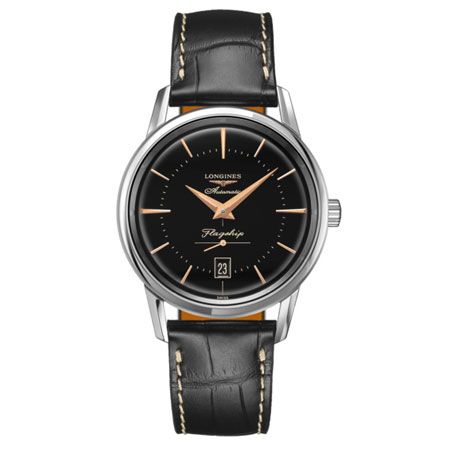 Three years after the aforementioned “context”, this work was originally announced in 1957. One of the masterpieces of “Longines”, which was very popular at that time, this is a new color black that appeared in 2020. A semi-matte black dial is set in a neat round case. A wedge-shaped applied index and dolphin hands are arranged in a perfect balance, creating a unique elegance. 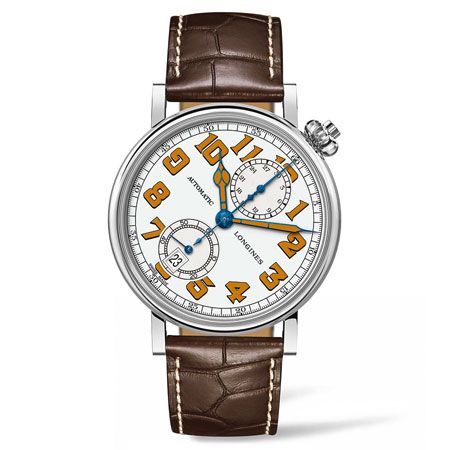 “Type A-7” ​​is the name given by the US Air Force, that is, the original aviation clock ordered by the US Air Force in 1935. The biggest feature is the dial tilted to the right by 40 degrees, which was born from the consideration that the pilot can read the information face-to-face without tilting the wrist. In addition, the movement follows the style of the time, such as a large crown that can be operated even while wearing gloves and a highly visible index, but the movement adopts a modern column wheel type. 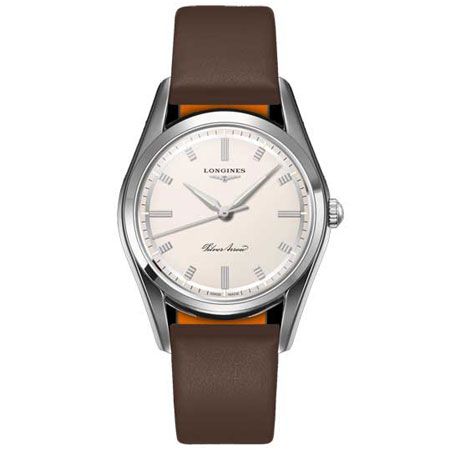 “Silver Arrow”, which was added as a new work in 2021, is named after the racing car that symbolized motor sports in the 1950s. Actually, it is the same model that was reprinted in 2009, but it is reproduced more faithfully in this work. Although it looks like a very simple three-handed round watch, it has elaborate details such as a three-dimensional index with a grooved stripe. It’s hard to get bored and you can choose the clothes you want to match, so it can be said that it is a watch that you can love for a long time.