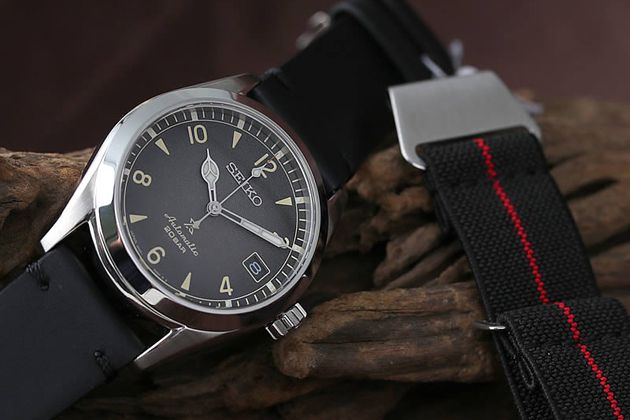 “Seiko Alpinist” has both outdoor functionality and sophisticated design that suits the city. From its high cost performance, we verified the ability of a famous machine that is said to have more value than the price.

It was born half a century ago. Do you know “Seiko Alpinist”? 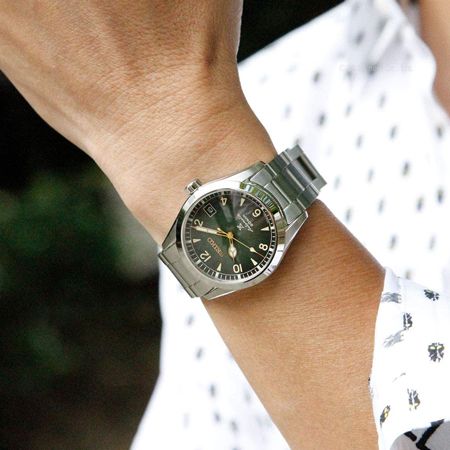 I can’t afford a watch that costs hundreds of thousands of yen, but I want a masterpiece watch that I can talk about. For you, Seiko’s “Seiko Alpinist” is the best choice. There are only roots in the model for mountaineers, and durability and waterproofness are with origami. And the high precision and timeless design of Seiko’s mechanical movement. Most of the models are in the affordable price range of 100,000 yen or less, but it is a rare item that many watch experts will look at.

The roots of the “Seiko Alpinist” are in the model “Laurel Alpinist” produced in the early 1960s. The one that made the name famous was “SCVF009” that appeared in 1995. The model with the green dial and golden index that became the icon later attracted Japanese watch fans. 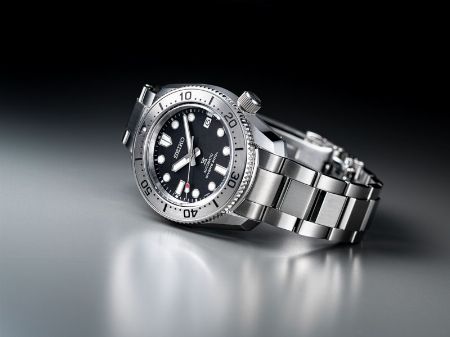 In 2006, “SARB017”, the ancestor of Chuko, which established itself as a masterpiece watch, made its debut. The design has been redesigned to be more stylish than the previous work, and the caliber 6R15 has improved accuracy and stability. The “SARB017”, nicknamed the “Japanese Explorer”, reigned as the signboard model of the “Seiko Alpinist” until the end of production in 2018. Even after it was discontinued, it has been popular, and two years later it will be revived as one of the “Seiko Prospex”. As a masterpiece that inherits Seiko’s orthodox style, it is still popular among watch fans. 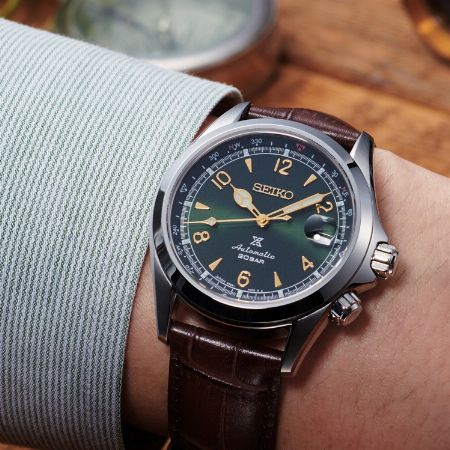 It is highly versatile as a wristwatch, and can be used as an on / off watch that can be worn in any style, from outdoor styles to American casual wear, casual dresses, and solid suit styles. “Seiko Alpinist” is a watch expert who agrees that “a watch worth more than the price” in terms of both function and design. Its high cost performance is the result of Seiko’s world-class technological capabilities.

The reason why it is preferred by experts. The appeal of “Seiko Alpinist” to understand from three points

Why is “Seiko Alpinist” regarded by watch experts? The three elements that have important implications for clarifying the reason are “a history of about 60 years,” “full-scale specifications as a sports watch,” and “a movement that holds Seiko’s manufacturing conscience.”

A solid history for more than half a century

“History” is an important factor in the status of a wristwatch. In that respect, the “Seiko Alpinist” is a venerable model with a long history of about 60 years. As mentioned above, its history with its roots in the “Alpinist Laurel” is summarized in the three models that appeared in 1995, 2006 and 2020. 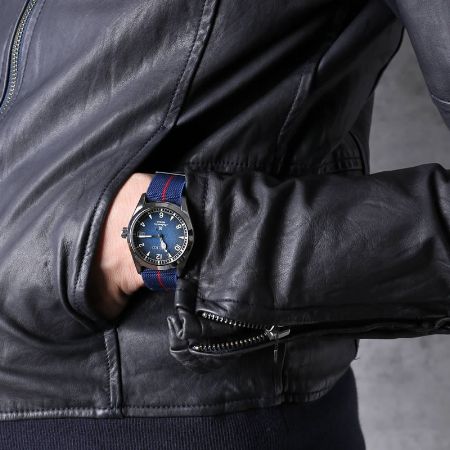 First of all, “SCVF009” released in 1995. Seiko’s famous designer, Shigeo Sakai, designed the origin of the “Seiko Alpinist”, which is the green dial, golden index, and brown brown leather that give off the scent of a British gentleman. The deep green dial, which was rare in the watch world at the time, is said to have been inspired by the almond green of his car, the mini rover, and the voluminous, rounded golden hour hand gives off a strong presence. The movement was a mechanical caliber 4S15 with a date display with a magnifying lens at 3 o’clock. 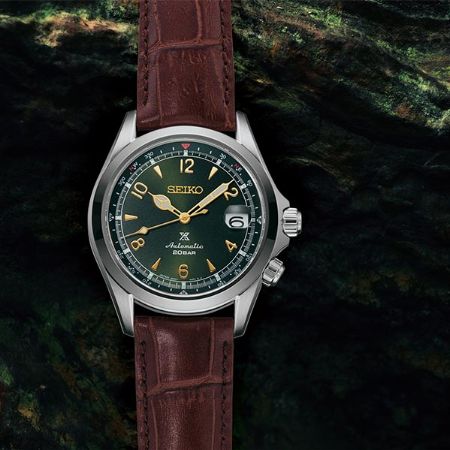 “SARB017” in 2006 is one of the milestones in the history of alpinists. This model, which was renewed by designer Ikuhiro Katsutani who produced many masterpieces, has a more sophisticated atmosphere with hands and prints while keeping the green dial. The magnifying lens on the date display and the red alpinist logo on the dial are omitted, and the cathedral hands called cobra hands accentuate. From its simple face, it has become known as “an on / off watch that can be used widely from formal to casual scenes”. Furthermore, the adoption of caliber 6R15 has improved accuracy and stability. 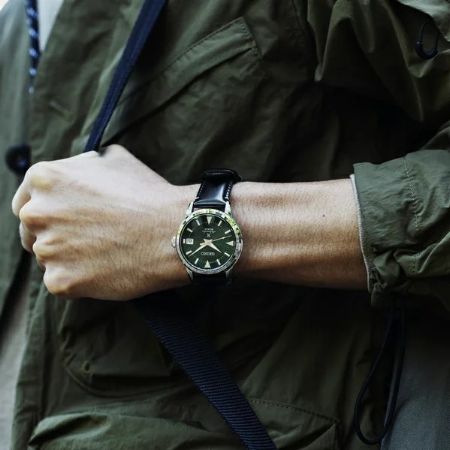 And in 2020, “SBDC091”, which is a reproduction of the 1995 model, will appear in the brand “Seiko Prospex”, which has full-scale functions for sports and outdoor scenes. The orthodox style of green dial and golden index has been inherited, and the movement is equipped with a new caliber 6R35 boasting a 70-hour power reserve. In the same year, the “1959 Alpinist Modern Model” was released, which brought the modern breath to the “Laurel Alpinist”, which is the origin of this model, and caught the attention of the watch industry. The history of “Seiko Alpinist” colored with numerous stories and episodes that tickle the hearts of watch fans. In the price range of under 100,000 yen, there are not so many “watches that can talk” like this.

High specs that are not ashamed of the sports watch category 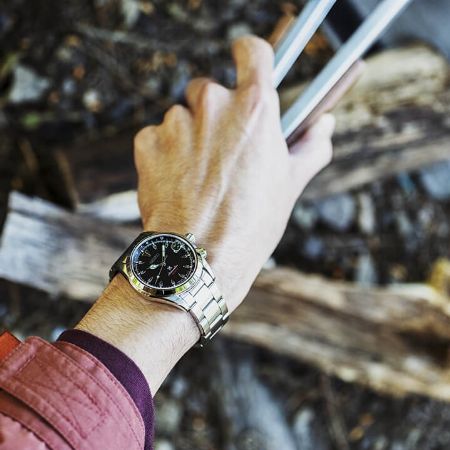 The biggest reason why “Seiko Alpinist” is said to be “a watch worth more than the price”. One of them has high specs. The original concept of a full-scale watch for mountaineers is not a date, but it has a sturdy structure that can continue to work even in harsh environments, and has a water resistance of 200 m. The visibility is also high, and the index and hands that use Lumibright as a luminous paint improve the visibility at night. The case size is 38 mm. The case, which is just the right size for a Japanese wrist, fits comfortably in a dressy suit-style arm. 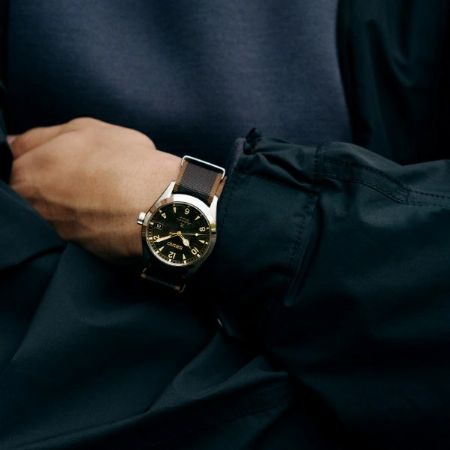 Regarding the perfection of the movement, which is the heart of a wristwatch, “Seiko Alpinist” is proud of the specs that can be talked about. The current model “SBDC091” that appeared in 2000 was equipped with the caliber 6R35. Boasting a 70-hour power reserve, this movement is characterized by its automatic winding and date display mechanism, but with a daily difference of +25 seconds to -15 seconds, which is unmatched by mechanical watches in the same price range.

Don’t miss the low beat of 21,600 vibrations / hour. The low beat frequency is highly stable and has the advantage of being able to maintain high accuracy even in outdoor fields where the watch is subject to heavy loads. On the other hand, if you pursue high beats, the accuracy will increase, but on the other hand, the disadvantage is that the failure rate will increase due to the increased consumption rate. It can be said that the reason why “Seiko Alpinist” chose low beat is based on Seiko’s stance of aiming for “a high-end machine that is hard to break down”.

If you are looking for a “so-called” face. “Seiko Alpinist” basic 4 books

If you want to buy “Seiko Alpinist”, we recommend the basic model that you can feel the royal road. Therefore, we have selected four representative models from the current models in the “Seiko Prospex” lineup. The basic design and specifications such as caliber 6R35 are almost the same, but you can create your own personality by coloring and belt material. 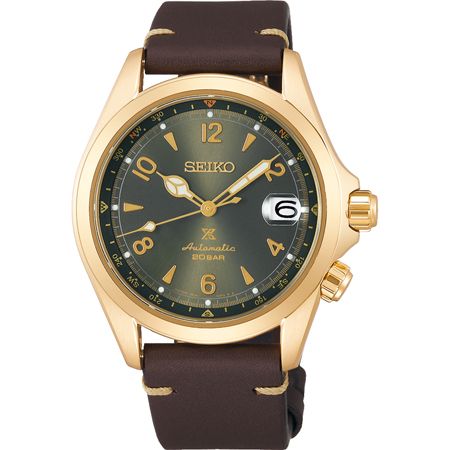 “Seiko Alpinist” also has a gold case version that has been gaining attention in recent years. The color scheme of the green dial, gold-plated SS case, and brown leather strap expresses the world view of “Seiko Alpinist”, “the forest where the sun shines.” Equipped with a simple adduction ring type directional meter that is useful outdoors. SS case, size 39.5 x 46.4 mm, self-winding. 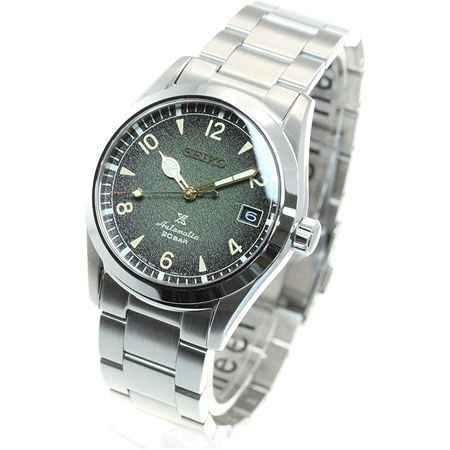 While inheriting the iconic details of the “Seiko Alpinist” such as the shape of the hands, the green dial is treated with a gradation color with shades to create a calm and deep look. It also features a slightly smaller case size than other models. Curved sapphire glass with an anti-reflective coating on the inside has excellent visibility. SS case, size 38 x 46 mm, self-winding. 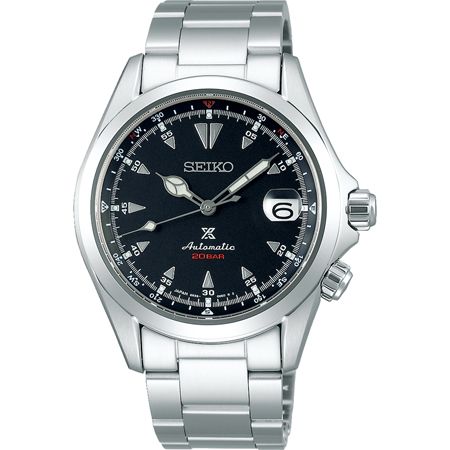 “SBDC087” with black dial and silver-colored hands and indexes creates a fearless image. Not only is it highly visible, but it also matches a wide range of styling thanks to the coloring that has only two colors. With a water resistance of 20 bar and an adduction ring type rotation azimuth meter, you can rely on it even in the outdoor scene. SS case, size 39.5 x 46.4 mm, self-winding. 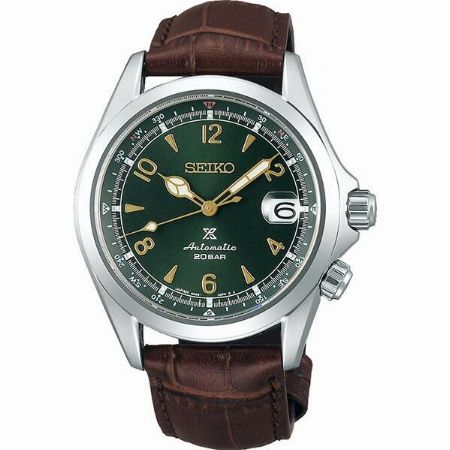 Brown calf belt with gold-colored hands and indexes on the green dial and embossed alligator. “SBDC091”, which can be said to be the orthodox style of “Seiko Alpinist”, is also recommended as a first choice. The windshield is made of sapphire glass with a lens on the calendar. Also equipped with an adduction ring type rotation azimuth meter. SS case, size 39.5 x 46.4 mm, self-winding.

The oldest and latest. What is “1959 Alpinist Contemporary Design”?

In 2021, two new models were released in “Seiko Prospex” that will make a new name in the history of “Seiko Alpinist”. First of all, I would like to introduce “1959 Alpinist Contemporary Design”, which is a modern interpretation of “Alpinist Laurel” that appeared in 1959. 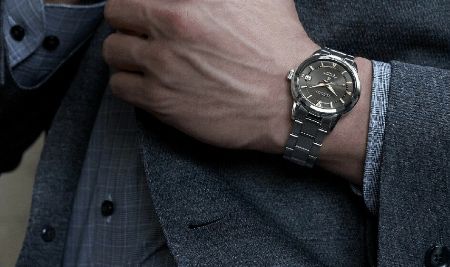 The basic design of the dial, including the index, makes use of the image of the first model, while adopting a three-dimensional case that combines a hairline surface and a mirror surface to create a modern image. Still, functional aspects such as highly visible index coated with sapphire glass and Lumibright and water resistance to 20 bar have been updated. It is evolving as a full-scale sports watch in modern times. The movement is the caliber 6R35, which boasts a long power reserve of approximately 70 hours. There are three models, including the green “SBDC149”, the white “SBDC145”, and the gray “SBDC147”. 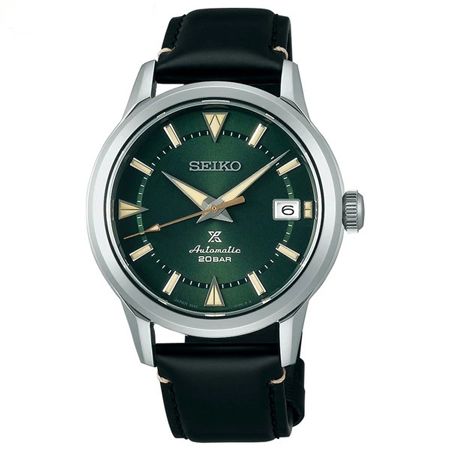 “SBDC149” with a green dial, which should be called the orthodox design of “Seiko Alpinist”. A black horse leather belt accented with white stitching adds to the ambience. The movement caliber 6R35 has a long power reserve of approximately 70 hours. Even if you don’t wear it on the weekend, you can use it as it is on the first Monday of the week. SS case, size 38 mm, self-winding. 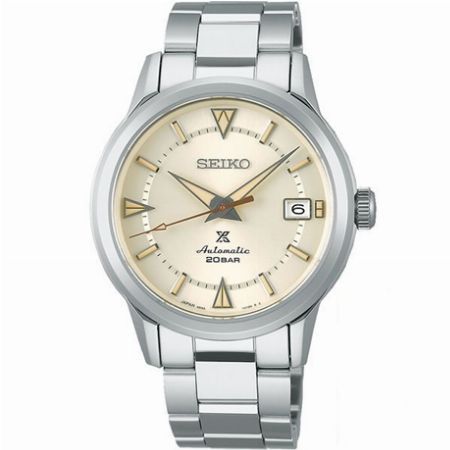 The white dial has a clean and elegant atmosphere that is a bit different from the green dial. Coupled with a stainless steel belt, it is a perfect fit for a solid suit style. Still, the waterproof function is 20 atm. It can be used with confidence even in outdoor fields where it gets wet with water. SS case, size 38 mm, self-winding. 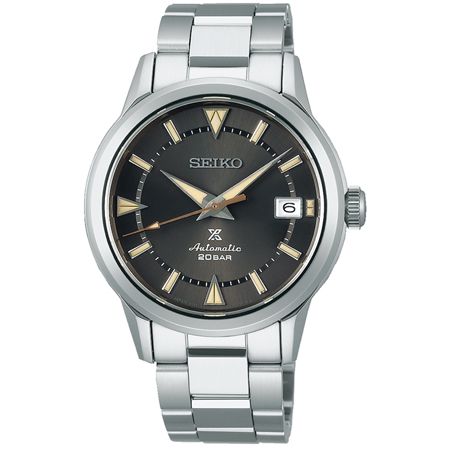 The “SBDC147”, whose dark gray dial enhances the urban image, is a versatile model that matches formal suits and mode styling. In addition, the color contrast between the hands and the index enhances visibility. Like the other models, the see-through back allows you to see the movement of the movement. SS case, size 38 mm, self-winding. 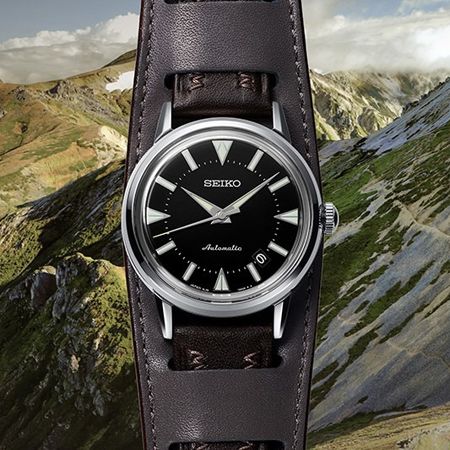 From the characteristic leather watch pad to the index layout, case design and glass shape, the original is faithfully reproduced. The wedge-shaped index placed at 3, 6, 9, and 12 o’clock realizes high visibility in combination with the index and Lumibright applied to the hands. While following such a venerable design, the specs have been updated in a modern way. The dome-shaped glass, which is characterized by its gentle shape, has been changed to sapphire glass, and the internal anti-reflective coating enhances visibility. The first “Alpinist” revived in the present age by Seiko’s aesthetic sense and technical capabilities. Despite the price range of over 300,000 yen, its majesty stimulates the ownership of watch lovers. 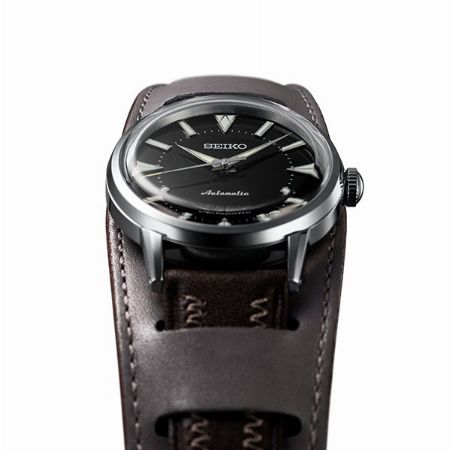 The “1959 Alpinist Reprint Design” was released in a limited edition of 1,959, named after the year of birth. Although a calendar mechanism not found in the original has been added, the case is as thin as the original. By adopting the thinnest movement of Seiko’s current model, caliber 6L35, the increase in thickness is suppressed to about 1 mm. It has an excellent accuracy with a power reserve of 45 hours and a daily difference of +15 seconds to -10 seconds. Water resistant to 10 bar. SS case, size 36.6 x 43.8 mm, self-winding.